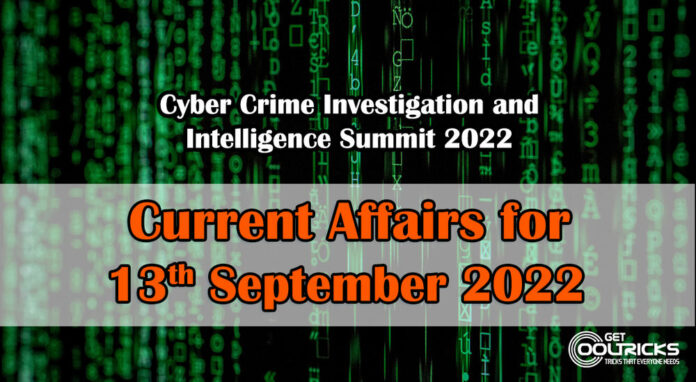 The 4th Cyber Crime Investigation and Intelligence Summit-2022 are being organised by the Madhya Pradesh Police to improve the knowledge and abilities of police sub-inspectors and senior investigating officers in order to effectively prevent cybercrime. The largest knowledge-sharing, thought-leadership, and cybercrime investigation and intelligence summit (CIIS 2022) in India were organised by the Madhya Pradesh Police through the State Cyber Police and Parimal Labs from September 12 to 22, 2022, in collaboration with Soft clicks Foundation, Cleartel Technology, and UNICEF.

India’s restrictions on rice exports have paralysed trading in Asia, with buyers scouring for alternative supplies from Vietnam, Thailand and Myanmar where sellers are holding off on deals as prices rise, industry officials said. India, the world’s biggest exporter of grain, banned shipments of broken rice and imposed a 20% duty on exports of various other types as the country tries to boost supplies and calm prices after below-average monsoon rainfall curtailed planting.

Indian Railways floated tenders for the first time to invite private players to build a wheel plant. The manufacturing and transport of wheels for the rakes were halted due to the Russia-Ukraine war. This initiative by the Indian Railways will make India self-reliant as well as draws a blueprint to become an exporter of wheels. The plant aims to manufacture at least 80,000 wheels every year for the Super-Fast Vande Bharat Express Trains in India. The plant aims to enable the production of 80000 wheels a year. The Steel Authority of India (SAIL) is supplying one lakh wheels and the rest of the wheels will be produced by the new plant.

American Express Banking Corp India has appointed Sanjay Khanna as its chief executive officer (CEO) and country manager. At present, Khanna heads the country executive team and is responsible for driving growth across the organisation’s consumer and commercial businesses. In his new role, Khanna will be leading several business development initiatives for American Express, while steering collaboration across its diverse businesses in India, adding his position will be key to strengthening the company’s strategic focus in the country.

Gujarat Chief Minister, Bhupendra Patel has announced Gujarat’s first-ever ‘Cinematic Tourism Policy’ in the presence of dignitaries including actor Ajay Devgan, and State Government Minister Shri. Purnesh Modi and Shri Arvind Raiyani. This new policy will create viable opportunities for film production in Gujarat and also provide employment opportunities to local people. There are many places in Gujarat like the White Desert of Kutch, and Shivrajpur Beach where there are ample opportunities to become shooting spots.

Ministry of Ports, Shipping and Waterways is building the National Maritime Heritage Complex at the historic Indus Valley civilization region of Lothal in Gujarat with a total cost of 3500 crores rupees. The first-of-its-kind complex in India, this centre will showcase India’s rich and diverse maritime heritage. The foundation stone for the NMHC project was laid by Prime Minister Narendra Modi and the consent for the master plan was given in March 2019.

HDFC Bank, India’s largest private sector bank, became the first bank in the country to issue an Electronic Bank Guarantee (e-BG) in partnership with National E-Governance Services Limited (NeSL). The paper-based, time-consuming process has been eliminated with the new electronic bank guarantees that can be processed, stamped, verified and delivered instantly with enhanced security. This is a transformational change, and the Bank will migrate to e-BG to benefit all its customers.

At Army Hospital (Research and Referral) in the nation’s capital, a model “Early Intervention Centre- Prayas” has been built with the goal of easing suffering and fostering confidence in parents while dealing with children who have special needs.

Britain’s King Charles has bestowed the titles of Prince and Princess of Wales on his eldest son William and daughter-in-law Kate, passing on the titles he and his late wife Diana previously held. Charles, who became Prince of Wales in 1958, automatically became king after the death of his mother, Queen Elizabeth.

Unique Farm ID to the Farmers by UP Gov