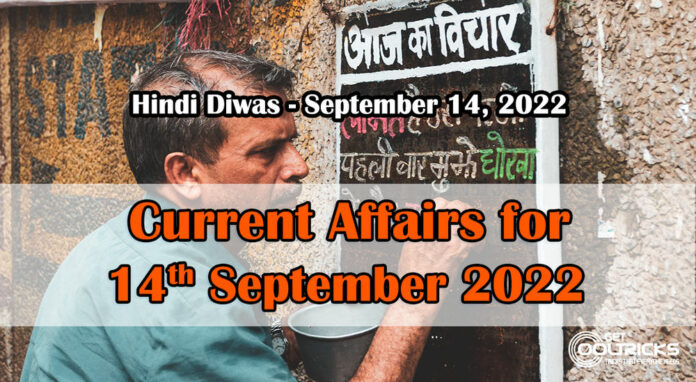 Hindi Diwas or Hindi Day is observed every year on 14 September to mark the popularity of Hindi as an official language of India. The language was adopted under Article 343 of the Indian Constitution. The first Hindi day was celebrated on 14th September 1953. Hindi is one of the major languages used in India as a large portion of the country’s population knows and uses the language. Schools, colleges and other educational institutions celebrate Hindi Diwas by organising various programs.

Hindi Diwas also marks celebrating the birthday of Beohar Rajendra Simha who played a crucial role in getting Hindi in the Devanagari script approved as an official language of India.

India will look to resume buying crude oil from Iran the moment US sanctions are eased, helping it diversify its import basket, a senior government official said. India stopped importing oil from Iran in mid-2019 following sanctions on the Persian Gulf nation by the Trump administration. The US and other world powers are meeting in Vienna to revive the Iran nuclear deal.

Gulam Ali, a Gurjar Muslim from Jammu and Kashmir, has been nominated to Rajya Sabha by President Droupadi Murmu on the recommendation of the Central government. In the notification, the Ministry of Home Affairs (MHA), “In exercise of the powers conferred by sub-clause (a) of clause (I) of article 80 of the Constitution of India, read with clause (3) of that article, the President is pleased to nominate Shri Gulam Ali to the Council of States to fill the vacancy caused due to the retirement of one of the nominated members.”

The military camp at Kibithu Garrison, which is very close to the Line of Actual Control (LAC) in Arunachal Pradesh, has been renamed ‘Gen Bipin Rawat military garrison’ in honour of the country’s first Chief of Defence Staff (CDS) who was killed in a chopper crash last December. As a young Colonel, Rawat commanded his Battalion 5/11 Gorkha Rifles at Kibithu from 1999-2000 and contributed immensely to strengthening the security structure in the area.

Hughes Communication India (HCI), has collaborated with the Indian Space Research Organization (ISRO), to launch its first high throughput satellite (HTS) broadband internet service in the country. Since last year, the company has been testing its operations in northern India.

Through the first high throughput satellite (HTS) broadband internet service, the company has promised to deliver high-speed satellite broadband service to remote locations across India from the desolate part of Leh Ladakh to the northeastern part of India.

INS Satpura and P8 I Maritime Patrol Aircraft of the Indian Navy reached Darwin in Australia for participating in the multinational Exercise Kakadu 2022, which is hosted by the Australian Navy. The Exercise Kakadu 2022 will be a two-week exercise both in the harbour and at sea.

This two-week-long exercise involves ships and maritime aircraft from 14 Navies. During the harbour phase of the exercise, the ship’s crew will engage in operation planning interactions and sports activities with participating Navies.

Bharatpe has appointed BP Kanungo, former deputy governor of the Reserve Bank of India (RBI), and Kaushik Dutta, current Chairman of Zomato, as the Independent Directors of Fintech Firm Bharatpe. Previously, former Chairman of the State Bank of India (SBI), Rajnish Kumar was the director of the company.

The two-day National Defense MSME Conclave and Exhibition begins in Kota, Rajasthan. In the exhibition, defence gear including T-90 and BMP-2 tanks, artillery cannons, numerous sniper and machine gun types, and military bridges are on display.

Vedanta And Foxconn to Invest 1.54 Lakh Crore In Gujarat For Chip Manufacturing

China has successfully tested its first fully solar-powered unmanned aerial vehicle (UAV) which can fly for months and can function even as a satellite if required. The maiden flight of Qimingxing-50 has been achieved, making it the first large-sized UAV powered only by solar energy.

The City of Los Angeles has officially designated September 17 Squid Game Day, in recognition of the South Korean Netflix series’ achievements. “Squid Game” was nominated for 14 Emmy Awards in July and is the first non-English language series to earn a nomination for Outstanding Drama Series. It was also the first Korean and first non-English language series to win a Screen Actors Guild Award.

The 74th Primetime Emmy Awards were held, to mark some remarkable American television performances until mid-2022.