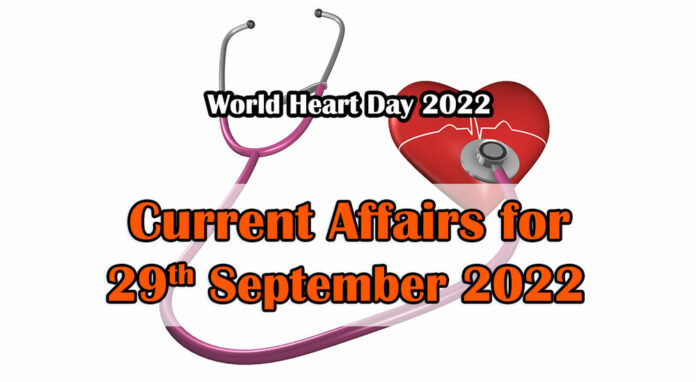 Every year on the 29th of September, people all around the world observe World Heart Day. The day is observed to raise awareness about the rising concerns of heart health, cardiovascular illnesses, the impact of overexercising on the heart and how heart care is of utmost importance.
The theme is ‘USE HEART FOR EVERY HEART’, “Use Heart” means to think differently, make the right decisions, act with courage and help others. Similarly, “For Every Heart” involves the use of “FOR” and shifts the focus from the actions themselves to the heir of such actions, allowing for wider application of the campaign while also making it more personal.

International Day of Awareness of Food Loss and Waste 2022

The Union Bank of India inaugurated the Ethical Hacking Lab at the Cyber Security Centre of Excellence (CCoE) in Hyderabad. The lab with a cyber defence mechanism will protect the bank’s information system, digital assets, and channels, against potential cyber threats. The lab was inaugurated by the bank’s managing director and CEO, A. Manimekhalai.

The Ministry of Housing and Urban Affairs (MoHUA) launched Swachh Toycathon under the Swachh Amrit Mahotsav. The competition aims to explore solutions for use of waste in the creation or manufacturing of toys. Secretary, MoHUA, Manoj Joshi, launched the event on MyGov portal and released the toolkit.

Economic growth in East Asia and the Pacific will weaken sharply in 2022 due to China’s slowdown, but the pace of expansion will pick up next year, the World Bank said. The Washington-based lender said in a report it expected 2022 growth in the East Asia and Pacific region, which includes China, to slow to 3.2%, down from its 5.0% forecast in April, and the previous year’s growth of 7.2%.

A $1 billion fund may soon be launched by the government in collaboration with the World Bank, and the Small Industries Development Bank of India (SIDBI). The fund will be used to provide guarantees against defaults on loans taken to buy electric two or three-wheelers. The NITI Aayog will be the facilitating agency of the project. It will aim to facilitate faster and easier financing of EVs.

Ayushmann Utkrishta Award 2022 has been given to Uttar Pradesh for adding several healthcare facilities to the health facility register. With 28728 new healthcare facilities added to the National Health Facility Register, Uttar Pradesh is the best-performing state in the nation. With over 2 crore ABHA Accounts, the state is also the second-best State for creating Ayushmann Bharat health accounts (ABHA). These are the state’s initial few landmarks.

Union Education and Skill Development and Entrepreneurship Minister, Shri Dharmendra Pradhan inaugurated and addressed the 13th FICCI Global Skills Summit 2022 on the theme of “Education to Employability – Making It Happen.” in New Delhi. The Summit would look through the NEP lens and focus on how India can become the “Skill Capital of the World,” using the UN Sustainable Development Goal 4 (SDG4) as an underlying theme.

The Uttar Pradesh cabinet has gave a green signal for the development of the first tiger reserve in the Bundelkhand region. The tiger reserve will span across 52,989.863 hectares of land including 29,958.863 hectares of buffer area and 23,031.00 hectares of the core area which was already notified as Ranipur wildlife sanctuary in the Chitrakoot district of the state.

Saudi Arabia’s powerful Crown Prince Mohammed bin Salman has been appointed as the prime minister by a royal decree. The crown prince, who is heir to the throne held by King Salman, already wields wide powers and is seen as the kingdom’s day-to-day leader. The royal decree appointing him as prime minister was carried by the Saudi Press Agency.

Joseph Gebbia added to the Tesla board

Tesla Inc. said that Airbnb co-founder Joseph Gebbia has joined the board of directors, reversing a decision to reduce the number of directors at the most valuable automaker in the world. Following the departure of Oracle Inc. co-founder Larry Ellison in August, Tesla announced in June that it will have just seven board seats, drawing criticism from a shareholder organisation for the absence of independent board members.

During his two-day visit to Gujarat, which is nearing election day, Prime Minister Narendra Modi will dedicate a number of infrastructure and development projects totaling more than Rs 29,000 crore. The first CNG (compressed natural gas) terminal in the world is scheduled to be inaugurated, together with phase 1 of the Ahmedabad Metro and phase 1 of the Diamond Research and Mercantile (DREAM) City in Surat, according to a statement released by the Gujarati government.

The Commerce Ministry announced the extension of the existing foreign trade policy by six months. The reason behind the development is currency volatility and global uncertainty. The ministry said, the geo-political situation is not suitable for long-term foreign trade policy.

The Ministry of External Affairs (MEA) announced that IFS officer Bandaru Wilsonbabu, who is now joint secretary in the ministry of external affairs, has been named as India’s new ambassador to the Republic of Madagascar. He is anticipated to start the assignment soon. Abhay Kumar will be replaced by Wilsonbabu, who most recently worked as the joint secretary for the Eurasia section.

Dams and Reservoirs in India