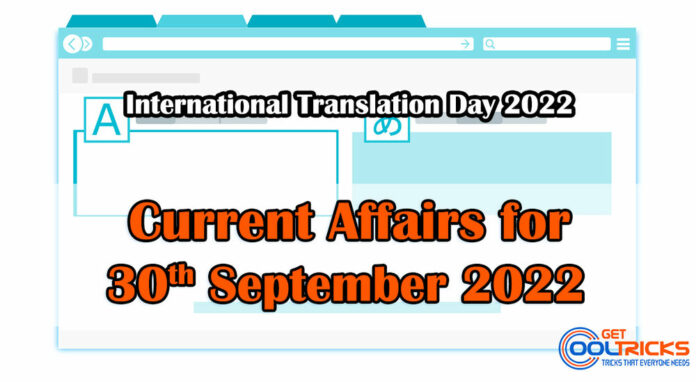 International Translation Day is being celebrated every year on 30 September to raise awareness about translation and languages which play an important role for society’s development. The day is meant as an opportunity to pay tribute to the work of language professionals, which plays an important role in bringing nations together, facilitating dialogue, understanding and cooperation, contributing to the development and strengthening world peace and security.

Reliance Jio Chairman Akash Ambani, son of billionaire Mukesh Ambani, has been named by TIME magazine in the TIME100 Next list that recognises “rising stars from across industries and around the world. Significantly, he is the only Indian to be featured on the list this year. However, there is another Indian-born American business leader, subscription social platform OnlyFans’ Indian-origin CEO Amrapali Gan, on the list as well.

The 68th National Film Awards will be given out this evening in New Delhi by President Droupadi Murmu. Legendary actress Asha Parekh will get the Dadasaheb Phalke Award of 2020 for her outstanding lifetime contribution to Indian cinema. These awards were postponed due to the COVID-19 pandemic.

Death of Jayanti Patnaik, former MP and first chair of the National Commission for Women

Jayanti Pattnaik, the first chair of the National Women’s Commission and a former member of parliament, passed away in Bhubaneswar, the capital of Odisha. She was the wife of late Janaki Ballav Pattnaik. President Droupadi Murmu has sent her condolences to her family, friends, and well-wishers, describing her as an accomplished social worker who won the hearts of the people of the state by her service and dedication.

Gandhinagar-Mumbai Central Vande Bharat Express train on September 30, 2022, Prime Minister Narendra Modi waved off in Gandhinagar. PM Modi is in Gujarat for two days. This is the third Vande Bharat train in the nation; the first two run between New Delhi and Shri Mata Vaishno Devi Katra and Varanasi and New Delhi, respectively.

English translation of ‘Lata: Sur-Gatha’ to release in January 2023

The English translation of the award-winning book “Lata: Sur-Gatha” will be released in January 2023. “Lata: A Life in Music”, originally written in Hindi by writer-poet Yatindra Mishra, is translated by noted writer and translator Ira Pande. And now celebrating the life and times of Lata Mangeshkar on her 93rd birth anniversary in 2023, the book is being published in the English language announced by publisher Penguin Random House India. The book has won the 64th National Film Award and the MAMI Award for Best Writing on Cinema (2016–17).

The Supreme Court has declared that all women have the right to safe and legal abortions up to 24 weeks of pregnancy, no matter their marital status. An abortion regulation that made a distinction between married and unmarried women was “artificial and constitutionally unsustainable,” according to a bench of Justices DY Chandrachud, JB Pardiwala, and AS Bopanna.

India has climbed to the 40th rank in the Global Innovation Index of the World Intellectual Property Organization. This is a huge leap of 41 places in 7 years. India has leapfrogged to 40th position on the Global Innovation Index (GII) 2022 from the 81st spot in 2015. India’s innovation performance is above average for the upper-middle-income group in almost every innovation pillar, with the exception of infrastructure, where it scores below average. Within Central and Southern Asia, India continues to lead in the 40th position, moving further up the rankings, from its 46th position in 2021.