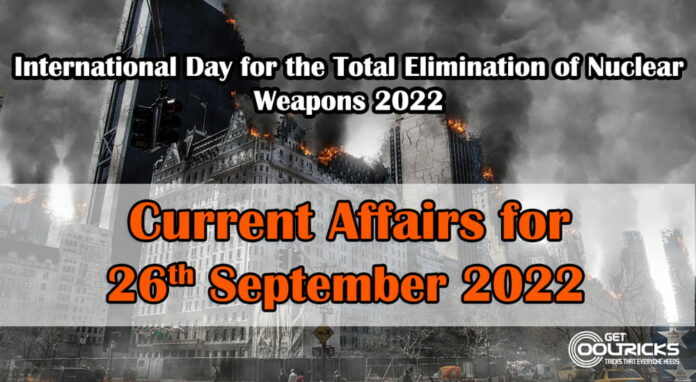 International Day for the Total Elimination of Nuclear Weapons 2022

The United Nations observes 26 September every year as the International Day for the Total Elimination of Nuclear Weapons. The aim of the day is to enhance public awareness about the threat posed to humanity by nuclear weapons and the necessity for their total elimination.
It provides an opportunity to educate the public and their leaders about the real benefits of eliminating such weapons, and the social and economic costs of perpetuating them.

World Contraception Day is marked on September 26 with a focus on creating awareness about contraceptive knowledge and family planning. To educate the younger generation about contraceptive measures.
It aims, “By 2030, ensure universal access to sexual and reproductive healthcare services, including family planning, information and education, and the integration of reproductive health into national strategies and programs.”

The Ministry of Environment, Forest and Climate Change (MoEFCC) will launch the ‘Swachh Vayu Sarvekshan’ programme under National Clean Air Programme 2019 (NCAP) to rank cities based on their actions to improve air quality. The ranking will be based only on the actions taken by the cities to improve the air quality in different domains and not on the measurement of the air quality parameters to rank the cities.

Appointment of Sanjai Kumar as new Chairman & MD of Railtel

As the new Chairman and Managing Director of RailTel, Sanjai Kumar is in charge. Sanjai Kumar previously held the position of Director (Network Planning & Marketing/NPM) at RailTel, along with the added responsibility of Director (Project, Operations & Maintenance/POM).

Dr Rajiv Bahl has been appointed as the new director general of the Indian Council of Medical Research (ICMR)-cum-secretary of the department of health Research for a period of three years. Bahl currently heads the research on maternal, newborn child and adolescent health cum-newborn unit on maternal, Department of Maternal Newborn Child and Adolescent Health and Ageing, at the World Health Organisation (WHO) in Geneva.

Make in India, the flagship program of the Government of India that aspires to facilitate investment, foster innovation, enhance skill development, and build best-in-class manufacturing infrastructure, completes 8 years of path-breaking reforms on 25th September 2022.
Launched in 2014 under Prime Minister Shri Narendra Modi, ‘Make in India’ is transforming the country into a leading global manufacturing and investment destination.
The initiative is an open invitation to potential investors and partners across the globe to participate in the growth story of ‘New India’. Make In India has substantial accomplishments across 27 sectors. These include strategic sectors of manufacturing and services as well.

The Indian Army and the Defence Geoinformatics and Research Establishment (DGRE) have jointly installed the Avalanche Monitoring Radar, the first of its kind in India, in north Sikkim.

Chhattisgarh government has decided to launch a campaign on women’s safety titled ‘Hamar Beti Hamar Maan’ (our daughter, our honour). The focus of the campaign is creating awareness on safety measures among school- and college-going girls and prioritising registration and investigation of women-related crimes. The launch of the campaign was announced by Chief Minister Bhupesh Baghel.

The highest-located district in India, Leh has achieved 100 per cent digitization of banking operations. Union Territory Level Bankers Committee Ladakh, the Reserve Bank of India has felicitated the bankers of the district. Leh district has completed the digitization of all the operating banks in a short span of a year.