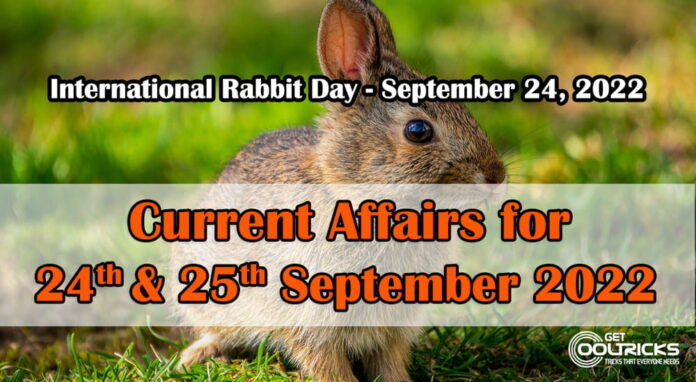 International Rabbit Day is on September 24 this year. Today we think of how rabbits have been a source of joy in our lives, be it as pets or friends of the meadow. Today has been set aside as a day we can consider ways to make their lives more comfortable by creating happy, healthy environments for them to live.

Union Finance Minister Nirmala Sitaraman will launch the Bharat Vidya, which is an online learning platform for Oriental and South Asian Studies. The Bharat Vidya is designed and developed by the Bhandarkar Oriental Research Institute (BORI).

The G4 grouping comprising India, Japan, Germany and Brazil expressed their concern over the lack of any “meaningful” forward movement on long-pending reform of the UN Security Council (UNSC) and demanded “urgency” on the issue (Read more).

Vice President of India, Jagdeep Dhankhar will inaugurate the third edition of the Lok Manthan program at the Srimanta Sankardeva Kalakshetra in Guwahati. The event will be facilitated by the Chief Minister of Assam Himanta Biswa Sharma.

This year’s theme for the Lok Manthan is Lokparampara (Lok Traditions) which will emphasize that the Lok Traditions have kept our culture and heritage alive and intact, and has strengthened our feelings toward National Selfhood.

TerraPay partnered with NPCI to enable cross-border transactions via UP

TerraPay, a Dutch payments infrastructure company has joined forces with India’s NPCI International Payments (NIPL) to facilitate cross-border transactions for Indian consumers and merchants. Indian consumers and merchants who have an active Unified Payments Interface Id (UPI Id) will be able to transfer money abroad. This service will utilize TerraPay’s infrastructure and the UPI network.

Gautam Adani and their family have topped with an estimated wealth of Rs. 10,94,400 crore. His daily wealth creation was estimated at Rs. 1,612 crores which showed 116 per cent growth as compared with the 2021 list.

Mukesh Ambani and their family have been named as the 2nd richest in India with an estimated wealth of Rs. 7,94,700 crore and a growth of 11 per cent compared with the 2021 list. His daily wealth creation velocity is Rs. 210 crores.

The International Cricket Council has announced that the World Test Championship 2023 Final will be hosted by The Oval in June 2023 while 2025 final will be played at Lord’s.

Power sector-focussed non-banking finance company (NBFC) REC Ltd. has been accorded the status of a ‘Maharatna’ Central Public Sector Enterprise, thus providing it with greater operational and financial autonomy. The granting of ‘Maharatna’ status will impart enhanced powers to the company’s board while taking financial decisions. REC Ltd. is the 12th company to be given the Maharatna Status.

Indian author and poet Meena Kandasamy has been announced as this year’s recipient of the Hermann Kesten Prize by the PEN Centre in Germany’s Darmstadt. The Hermann Kesten Prize honours personalities who, in the spirit of the charter of the PEN association, stand up for the rights of persecuted authors and journalists.

Antyodaya Diwas is celebrated annually on 25th September in India. It marks the birth anniversary of Indian leader Pandit Deendayal Upadhyaya and is celebrated in his honour to remember his life and legacy. He was one of the most prominent personalities in the history of Indian politics. This year, the Antyodaya Diwas marks the 105th birth anniversary of Upadhyaya. He was the co-founder of Bharatiya Jana Sangh (BJS) and a Rashtriya Swayamsevak Sangh (RSS) thinker.