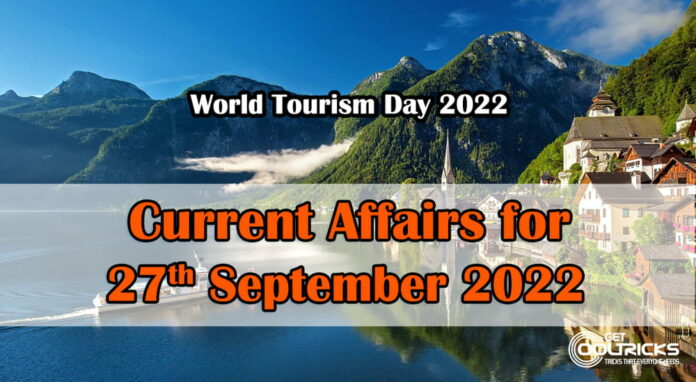 World Tourism Day 2022 is observed on 27 September globally. This day is celebrated every year to focus on promoting tourism in various parts of the world. It was initiated by the United Nations World Tourism Organisation (UNWTO).

The theme of World Tourism Day 2022 is ‘Rethinking Tourism’. Everyone will focus on understanding the growth of the tourism sector and reviewing and redeveloping tourism after the COVID-19 pandemic.

Chandigarh airport to be named after Bhagat Singh

Prime Minister Narendra Modi has announced that the Chandigarh airport will be renamed after Shaheed Bhagat Singh as a tribute to the great freedom fighter. Punjab & Haryana governments had last month (Aug 2022) agreed to name the airport after freedom fighter Shaheed-e-Azam Bhagat Singh.

The Rs 485-crore airport project is a joint venture of the Airports Authority of India (AAI), and the governments of Punjab and Haryana.

Union Home and Cooperation Minister Amit Shah is likely to inaugurate a daylong dairy cooperative conclave of the eastern and northeastern zones in Sikkim on October 7. The conclave is being organised by the National Cooperative Dairy Federation of India (NCDFI).

NCDFI Chairman Mangal Jit Rai said Shah’s office has confirmed his participation at the conclave to be held in Gangtok. Sikkim Chief Minister P S Tamang will be the guest of honour at the function.

Union Minister for DoNER, Tourism & Culture, G. Kishan Reddy has launched the two-day virtual conference ‘SymphoNE’. The Virtual Conference ‘SymphoNE’ is being organized on 24th & 27th of September 2022 by the Ministry of Development of the North Eastern Region on the occasion of World Tourism Day. North East India is blessed with amazing food, culture, stunning landscapes, heritage and architecture and ranks among the most beautiful places on the earth. But, there are grand opportunities that can be filled to boost Tourism Sector in the Region.

The 10,000-word Indian Sign Language Research And Training Centre (ISLRTC) lexicon serves as the foundation for Sign Learn. All the terms in the ISL dictionary can be searched using Hindi or English on the app, which is accessible in Android and iOS versions.

Indian Railways is installing a Real-Time Train Information System (RTIS), developed in collaboration with the Indian Space Research Organisation (ISRO), on locomotives “for automatic acquisition of train movement timing at the stations, including that of arrival and departure or run-through”.

On September 24, at Rashtrapati Bhavan, President Droupadi Murmu presented the National Service Scheme NSS Awards for the 2020–21 academic year, according to a release from the Ministry of Youth Affairs and Sports. 42 prizes in total were given out. The recipients of the honours were two institutions, ten NSS units, their programme officers, and thirty NSS volunteers.

Asha Parekh to be bestowed with 52nd Dadasaheb Phalke award

Veteran actress Asha Parekh has been declared the recipient of the 2020 Dadasaheb Phalke award, making her the 52nd awardee of the honour. Union Minister for Minister of Information and Broadcasting, Anurag Thakur announced her name.

She worked in more than 95 films and was the chairperson of the Central Board of Film Certification from 1998-2001. She is also a recipient of the Padma Shri, awarded to her by the Government of India in 1992 for services to cinema.

Assam to use portable device ‘SAANS’ to stop neonatal deaths

The Assam government has decided to use SAANS, an air pressure machine developed by a Bangalore-based start-up, in the state-run hospitals across the state. ‘SAANS’ is a portable neonatal Continuous Positive Air Pressure (CPAP) system that can provide lifesaving breathing support to infants in hospital settings as well as during travel.

Telangana festival Bathukamma: The state floral festival known as Bathukamma has started in Telangana, and ladies are taking part in it in great numbers. The state’s nine-day official celebration got underway on the 25th. On the auspicious anniversary of Bathukamma, Prime Minister Narendra Modi thanked everyone, especially the Nari Shakti of Telangana. PM Modi expressed his desire in a tweet that this event will strengthen our ties to nature and pique our interest in flowers.

Free Upgrade to Windows 10 from Windows 7 or 8