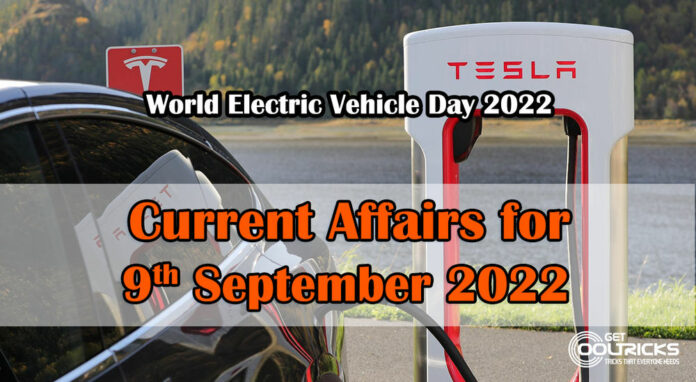 World Electric Vehicle (EV) Day 2022 is observed on the 9th of September. World EV Day is observed to emphasize the importance of e-mobility. World EV day helps to spread awareness about sustainable transport facilities to the people. Air pollution is mainly caused by transportation, and EVs are one of the major alternatives to decrease air pollution.

The International Day to Protect Education from Attack is an international observance established by a unanimous decision of the United Nations General Assembly in 2020. It is observed on September 9 of each year. The purpose of the day is to raise awareness regarding the importance of safeguarding schools as places of protection and safety for students and educators and the need to keep education at the top of the public agenda.

Indian and Chinese troops have begun disengaging at Patrolling Pillar (15) in the Gogra-Hotspring region of Eastern Ladakh. Forces of the two countries have been locked in a confrontational position in the area since April 2020. “On 8th September 2022, according to the consensus reached in the 16th round of India China Corps Commander Level Meeting, the Indian and Chinese troops in the area of Gogra-Hotsprings (PP-15) have begun to disengage in a coordinated and planned way, which is conducive to the peace and tranquillity in the border areas. LAC Stands for Line of Actual Control.

India ranks 132 out of 191 countries: in UNDP’s human development index

Rajasthan government launched an ambitious scheme to provide 100 days of employment to needy families in urban areas on the lines of the rural employment guarantee scheme MGNREGA. People from the age group of 18 to 60 are eligible for the scheme. Interested families will get 100 days of employment. The scheme will be implemented in all the urban local bodies from September 9.

SBI-WAARE collaborate to Fund Projects for Customers and Channel Partners

The largest solar panel producer in India, WAAREE, has an agreement with the State Bank of India (SBI) for unsecured solar project financing through the Surya Shakti Solar Finance Scheme and working cash for channel partners under EDFS (Electronic dealer finance scheme). Through the Surya Shakti Solar Finance Scheme, WAAREE plans to leverage a credit line of more than $500 million and offer loan borrowers a digital platform for a simple application process.

Indian superfood brand Pintola, Fast­moving consumer goods (FMCG) company announced a renowned Indian Football Captain, Sunil Chhetri as Brand Ambassador. He was appointed as Pintola Brand Ambassador for his similar values of consistency and perfection with the company to promote the idea of a healthier India to this generation.

The U.S. Unveils 2 Billion $ In Military Aid For Europe

U.S. Secretary of State Antony Blinken made an unscheduled visit to Kyiv, as the Biden administration announced major new military aid worth more than $2 billion for Ukraine and other European countries threatened by Russia.

Pending expected congressional approval, about $1 billion of that will go to Ukraine and the rest will be divided among Albania, Bosnia, Bulgaria, Croatia, the Czech Republic, Estonia, Georgia, Greece, Kosovo, Latvia, Lithuania, Moldova, Montenegro, North Macedonia, Poland, Romania, Slovakia and Slovenia. It will go to help those countries “deter and defend against emergent threats to their sovereignty and territorial integrity” by enhancing their military integration with NATO and countering Russian influence and aggression.

How to Optimize Windows Startup