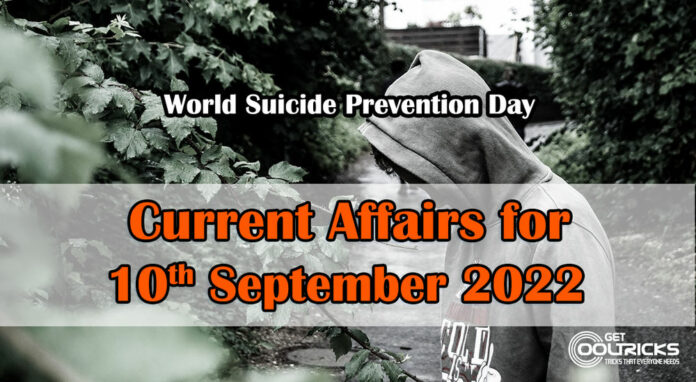 World Suicide Prevention Day (WSPD), celebrated annually on 10 September, is organized by the International Association for Suicide Prevention (IASP) and endorsed by the World Health Organization (WHO). The theme of WSPD 2022, “Creating hope through action,” reflects the need for collective, action to address this urgent public health issue. The overall goal of this day is to raise awareness about suicide prevention worldwide. Objectives include promoting stakeholder collaboration and self-empowerment to address self-harm and suicide through preventative action.

The National Mission for Clean Ganga organized Himalayan Diwas with Naula Foundation. Himalaya Day 2022 was observed under the theme ‘Himalayas will be safe only when the interests of its residents are protected. The day is celebrated with an aim to preserve the Himalayan ecosystem and region. This day is celebrated to mark the importance of the Himalayas. The Himalayan hill cities face many challenges due to poor building planning and design, poor infrastructures like toads, water supply, sewage etc. and unprecedented felling of trees.

The Places of Worship Act 1991 was passed by parliament during the Ram Janmabhoomi movement. The Act was introduced to promote peace, harmony and brotherhood. The main objective of the Act is to maintain the religious character of any such place as it existed on the 15th day of August 1947 (at the time of Independence). The act prohibits conversion of any place of worship or changing the religious character of any place from its status at the time of Independence. The main purpose behind the Act was to check and control communal hatred and promote peace and harmony in the country. The 1991 Act covered all disputed sites to which religious groups had raised a claim. The Ram Janmabhoomi-Babri case was excluded from the provision of the Act. Section 4(2) of the Act says that any legal proceeding with respect to the conversion of the religious character of any place of worship existing on August 15, 1947, pending before any court, shall be dropped and no fresh suit or legal proceeding shall be initiated.

Bihar Chief Minister, Nitish Kumar has inaugurated India’s longest rubber dam ‘Gayaji Dam’ on the Falgu River in Gaya. The dam has been built at an estimated cost of Rs 324 crore. Experts from IIT (Roorkee) were involved with the project. There will be enough water in the dam round the year for the convenience of pilgrims. With its construction, now at least two feet of water will be available in the Falgu River near Vishnupad Ghat throughout the year for the devotees who come here to do Pind Daan.

Odisha government has launched a rainwater harvesting scheme called ‘Community Harnessing and Harvesting Rainwater Artificially from Terrace to Aquifer (CHHATA). The new scheme was approved by the Cabinet last month. It will be implemented for a period of five years.

Former India Chief of Naval Staff, Admiral Sunil Lanba has been conferred Singapore’s prestigious military award, the Pingat Jasa Gemilang (Tentera) or Meritorious Service Medal (Military) (MSM(M)), by President Halimah Yacob. Admiral Lanba has been conferred the award for his outstanding contributions to enhancing the strong and long-standing bilateral defence relationship between the Indian Navy and the Republic of Singapore Navy.

RBI imposes fine on three entities for failing to comply