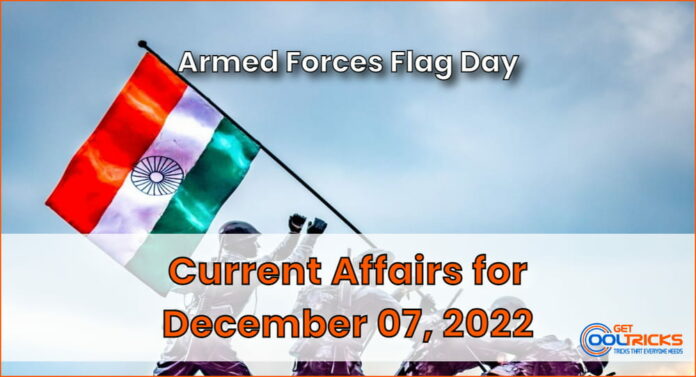 Armed Forces Flag Day is observed across the country on 7 December with the objective of collecting funds from the common people and honouring the martyrs and the men who fought with bravery on the borders to safeguard the country’s honour.

International Civil Aviation Day is observed on 7 December worldwide to raise awareness about its importance to the social and economic development of States and the role that ICAO plays in International air transport.

The initiative will use “prebunking” videos – designed to counter false claims before they become widespread – circulated on the company’s YouTube platform and other social media sites.

Google’s efforts to challenge the spread of misinformation mark a contrast with rival Twitter which is cutting its trust and safety teams, despite new owner Elon Musk saying it will not become a “free-for-all hellscape”.

The US Unveils Its Newest Nuclear Stealth Bomber

The unveiling of the new bombers comes at a time of heightened geopolitical tensions between the US, Russia and China amid the war in Ukraine and the territorial integrity of Taiwan.

Russian and Chinese strategic bombers flew a joint eight-hour patrol over the western Pacific in a display of ongoing military cooperation between the two nations. China’s Defence Ministry called the mission a “routine” effort in bolstering defence ties with Russia. Moscow and Beijing are also currently developing strategic stealth bombers – China’s Xian H-20 and Russia’s nuclear-capable Tupolev PAK DA – which are expected to compete with the B-21.

This is the first time India is hosting a conclave of top security officials from Central Asian countries including Kazakhstan, Kyrgyzstan, Tajikistan and Uzbekistan focussing on the evolving security situation in Afghanistan and ways to deal with the threat of terrorism emanating from that country.

The second cyclone of the post-monsoon season is likely to form over the southwest Bay of Bengal and hit the east coast in Tamil Nadu, Puducherry and Andhra Pradesh, the India Meteorological Department predicted.