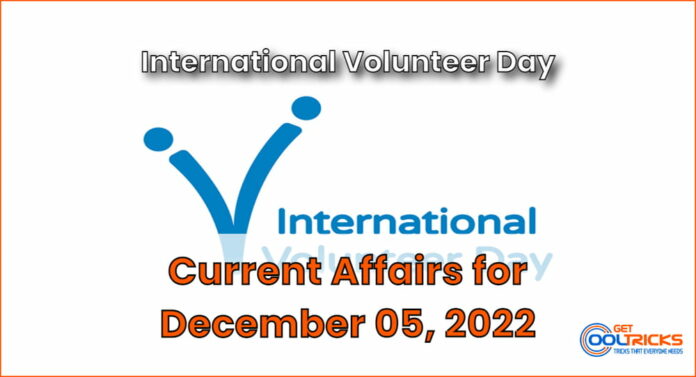 International Volunteer Day (IVD) is celebrated on 5 December every year. This day provides a chance for volunteers and organisations to celebrate their efforts, and values and promotes their work among their communities, etc.

World Soil Day is observed on 5 December to raise awareness about the importance of soil, healthy ecosystems and human well-being.

Canara Bank won the Banker’s Bank of the Year Award

Canara Bank won the ‘Banker’s Bank of the Year Award 2022’’ for India segment at the Global Banking Summit held in London. Bank Managing Director and Chief Executive Officer LV Prabhakar received the award from the organisers.

These are prestigious awards to the banking industry and Canara Bank has been adjudged as the Best Bank in India for 2022. It expressed gratitude to its customers, investors, staff and other stakeholders.

Indian tech brand “Noise” has appointed Virat Kohli as its new brand ambassador for its smartwatches. The new partnership will bring together the two domains together which is said to exemplify the brand.

The partnership will further help in deepening consumer trust and allegiance, claims the company. Noise and Virat Kohli- both are leaders in the smart connected lifestyle industry and the cricket world respectively.

He defeated Italy’s Danilo Sollazzo in the 10-metre rifle play-off by 16-8. Athletes from 42 nations representing 43 ISSF Member Federations from all continents are taking part in this competition, which is being held since November 28.

The Reserve Bank of India (RBI) has put in place a framework to allow overseas subsidiaries and branches of Indian banks and financial institutions to undertake activities not specifically permitted in the Indian domestic market.

IDFC Asset Management Company Limited (AMC), one of the top 10 AMCs in the country, has received regulatory clearances from regulators for its proposed change in ownership.

India’s Greenhouse-in-a-box was among the five winners announced by the Prince of Wales, Prince William, in Boston, United States. It is a sustainable solution for small-scale farmers developed by an Indian startup, Kheyti, in Telangana which has won one million pounds ($1.2 million).

The aim of this annual report is to support the monitoring and management of global freshwater resources in an era of growing demand and limited supplies.

International Day of Banks is celebrated on December 4 to recognise the importance of multilateral and international development banks in financing sustainable developments. United Nations also observes the day in recognition of the vital role of banking systems in Member State in contributing to the improvement of the standard of living.