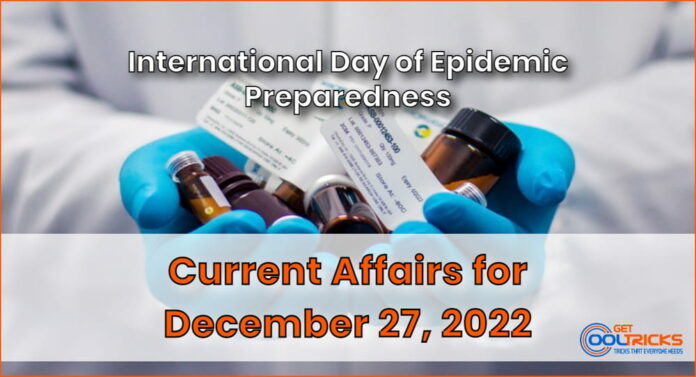 International Day of Epidemic Preparedness on December 27 serves the purpose of creating awareness about epidemics. The truth is, the world has been infected by numerous epidemics in history. However, mankind still managed to survive by finding ways to curb the spread of viruses.

Russian President Vladimir Putin expressing his willingness to come to the negotiating table, Zelenskyy’s plan focuses on various key areas, including nuclear and energy security, food security, the release of prisoners of war and deported persons, the implementation of the UN Charter and the restoration of territorial integrity, the withdrawal of Russian troops and the end of hostilities, justice and reparations, and counteracting ecocide.

The Union Ministry of Power and the Defence Research and Development Organisation (DRDO) have recently signed a Memorandum of Understanding (MoU) to set up early warning systems for vulnerable hydro projects or power stations in the hilly regions.

CEBR Forecast on the Indian Economy

The revised bank locker rules were released by the RBI on August 2021. All the existing locker depositors are required to provide proof of eligibility to access renewed locker arrangements.

Project Vaani will be implemented jointly by the Indian Institute of Sciences (IISc), ARTPARK (AI and Robotics Technology Park), and Google to gather speech data from across India for the creation of an AI-based language model that can understand diverse Indian languages and dialects.