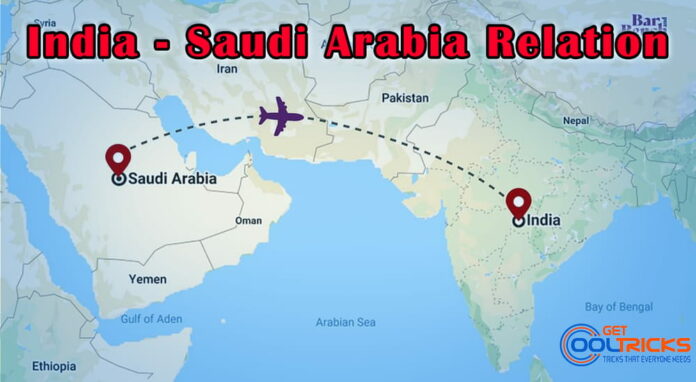 Saudi Arabia is India’s fourth largest trade partner (after China, the USA, and Japan) and a major source of energy as India imports around 18% of its crude oil requirement from the Kingdom.

Other proposed major investments include:

In the renewable energy sector, Saudi Company Al- Fanar has a controlling stake in 600MW Wind Power projects in India.

Saudi Aramco is also discussing with Reliance Industries to acquire a 20% stake in its oil-to-chemicals business.

In 2021, an MoU on Yoga Cooperation was signed between the Saudi Ministry of Sports and India’s Ministry of AYUSH, which paved the way for the establishment of formal Yoga standards and courses in the Kingdom, marking the first time such standards were implemented by any country in the Gulf region.

Approximately 2.2 million strong Indian community is the largest expatriate community in the Kingdom.

The annual Hajj pilgrimage is another important component of Indo-Saudi bilateral relations.

The Strategic Partnership Council was instituted in October 2019 during the visit of the Prime Minister of India to the Kingdom of Saudi Arabia and has two main pillars:

Outcomes of the meeting: