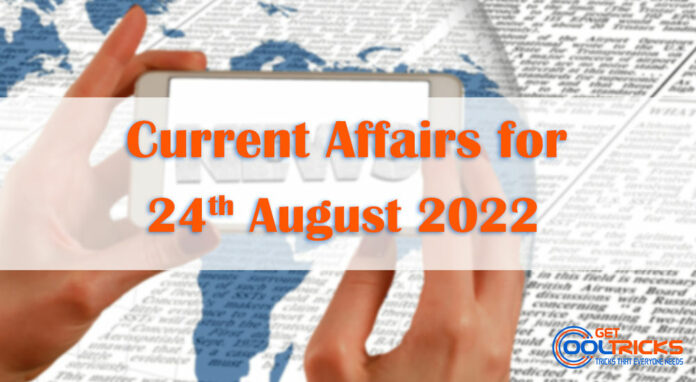 1. Schools in Telangana to get digital

UK Prime Minister Boris Johnson on Wednesday met Ukrainian President Volodymyr Zelenskyy in Kyiv to mark Ukraine’s Independence Day. Johnson announced a £54 million military support package to the country on the occasion, which will include 2,000 drones. “The UK will continue to stand with our Ukrainian friends. I believe Ukraine can and will win this war,” Johnson said.

A Hyderabad court served a notice to BJP leaders Parvesh Verma and Manjinder Sirsa in a defamation case filed by TRS MLC K Kavitha. Kavitha, who is Telangana CM Chandrashekar Rao’s daughter, was accused of being the middleman between the liquor mafia and the Delhi government. The court directed the BJP leaders to not make defamatory statements in the media.

Two and three-wheeler manufacturer TVS Motor has invested in former Formula 1 driver Narain Karthikeyan’s startup to acquire a 48.27% stake. TVS has invested over ₹85 crores in DriveX (NKars Mobility Millennial Solutions Private Limited), a pre-owned two-wheeler platform. DriveX was founded in April 2020 and began as a two-wheeler subscription platform, and has since spread to five cities.

Furniture e-commerce company Pepperfry has acquired commercial interior solutions company Brandmakerr for an undisclosed amount. Pepperfry has appointed Brandmakerr founder, Rahul Kapuria, as the Vice President. With this deal, Pepperfry said it will foray into commercial projects in retail, banking, and HORECA (hotel, restaurant, and cafe) sectors as this opens a new area of business for them.

9. Latin America should be a major hub for India said Jaisankar

External Affairs Minister S Jaishankar has stressed on the importance of making Latin America a major business hub for India. Jaishankar, who is on a six-day official visit to Paraguay, Brazil, and Argentina, interacted with prominent businessmen in Sao Paulo on Tuesday. “Business is the ballast that provides steady sailing for relationships,” Jaishankar said in a tweet after the meeting.

10. Terrorism is a crime against humanity: Rajnathnsingh at SCO meet

Every form of terrorism, including cross-border terrorism, is a “crime against humanity”, Defence Minister Rajnath Singh said at a Shanghai Cooperation Organisation (SCO) meeting in Tashkent on Wednesday. Singh added that Afghan territory must not be used for terror activities. The SCO member states are India, China, Russia, Uzbekistan, Kazakhstan, Tajikistan, Kyrgyzstan, and Pakistan.

Tropical Storm Ma-on gathered force and headed towards Hong Kong and other parts of southeast China on Wednesday. Cities in Guangdong province closed high-speed rail and ferry services, workers on sea projects were evacuated and several flights were canceled. The Hong Kong Observatory warned winds with mean speeds of 63 km/h or more were expected.

The Chilean government said on Tuesday that it has revived efforts to pass legislation that would reduce weekly working hours. The bill, which aims to reduce the working week from 45 hours to 40 hours, was first introduced in the country’s Congress in 2017. Lawmakers will debate a series of changes to the bill made by President Gabriel Boric’s government.