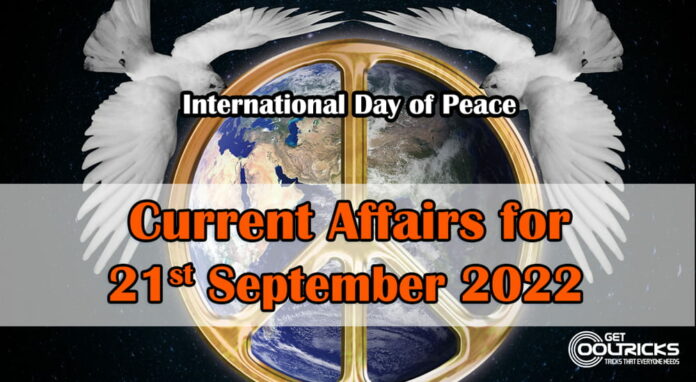 The International Day of Peace is observed globally on September 21. The United National General Assembly marks the day by promoting ideals of peace among nations and people by observing non-violence and a ceasefire for 24 hours. This year’s theme is “End racism. Build peace.” The UN General Assembly has declared this as a day devoted to strengthening the ideals of peace, by observing 24 hours of non-violence and cease-fire.

World Alzheimer’s Day is observed annually on September 21 to raise awareness about neurological disorders. Alzheimer’s disease is the most common cause of dementia and affects the person’s memory, mental ability, and ability to carry out simple tasks.

This year’s theme for World Alzheimer’s Month is ‘Know Dementia, know Alzheimer’s’. It is in continuation with the last year’s campaign which focused on warning signs and diagnosis of dementia and also the effect of the COVID-19 pandemic on the dementia community around the world. However, this year, special emphasis will be laid on post-diagnosis support for dementia.

Gujarati film “Chhello Show”, a coming-of-age drama about a young boy’s love affair with cinema in a village in Saurashtra, is India’s official entry for the 95th Academy Awards or Oscar awards, the Film Federation of India (FFI) announced. Titled “Last Film Show” in English, the Pan Nalin directorial will release in theatres countrywide on October 14. The 95th Academy Awards are scheduled to take place on March 12, 2023, in Los Angeles.

Prime Minister Narendra Modi turned 72. To mark the occasion, he welcomed eight cheetahs that had been transported to India from Namibia and unveiled India’s National Logistics Policy 2022.

8 IITs to have directors appointed by President Droupadi Murmu

India and Egypt have signed an MoU to bolster defence cooperation and decided to enhance joint military exercises, training, co-production, and maintenance of equipment. The MoU was signed by Defence Ministry of India Rajnath Singh and General Mohamed Zaki from Egypt at a meeting in Cairo.

Bihar govt is set to introduce ‘no-bag day’ in schools

The Bihar government is set to introduce a “no-bag day” rule in schools and a mandatory games period at least once a week to reduce the burden on students. The weekly ”no-bag day” will have task-based practical classes.

The Indian Army has achieved a remarkable achievement, activating satellite-based Internet service on the Siachen Glacier, which is the world’s highest battlefield. On the same day, the domestic defence industry was invited to offer critical equipment for emergency procurement in consonance with its commitment to ‘fight future wars with Indigenous solutions’.

Siachen Glacier is very important for the Indian Army as it is a place of concern and a constant target of attacks from both enemy countries, which is China and Pakistan.

Bangladesh won a historic victory at the SAFF Women’s Championship to lift the maiden title at the Dashrath Rangshala Stadium in Kathmandu, Nepal.

Bangladesh skipper Sabina Khatun, who was the top scorer of the tournament netting eight goals in five games, dedicated the trophy to the people of Bangladesh.
Goalkeeper Rupna Chakma from Bangladesh was named the best goalkeeper.

The Union Minister for Agriculture and Farmers Welfare, Shri Narendra Singh Tomar virtually addressed the Leeds-2022 conference organized by the Federation of Indian Chambers of Commerce and Industry (FICCI) in New Delhi.

Maharashtra to establish an institution similar to NITI Aayog

The state’s deputy chief minister, Devendra Fadnavis, revealed in a meeting that the Maharashtra government intends to create an organisation along the lines of Niti Aayog.

Run a web server on your computer using WampServer (WAMP)