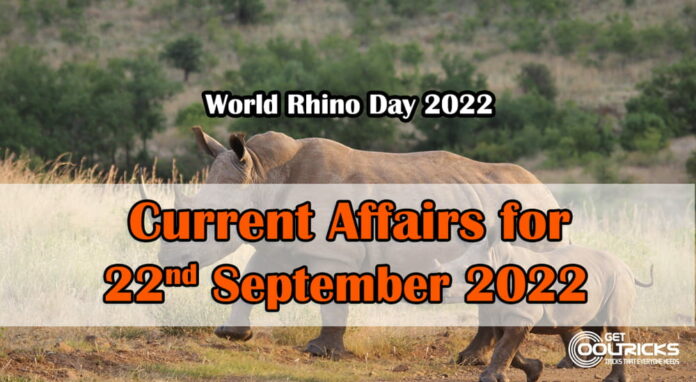 the theme “Five Rhino Species Forever”. The goals of this day are to promote the noble cause of raising awareness about the need to save rhinos from danger to their lives. The rhinos are constantly under severe threat.

World Rose Day for the welfare of cancer patients worldwide is celebrated annually on the 22nd of September. This day aims to encourage and support those people who are fighting their battle against cancer. The day aims to bring happiness and hope into the lives of such patients and reminds them that they can emerge victorious in their battle against cancer through determination and positivity.

Currently, India has been using the Unified Payments Interface (UPI) for low-value payments with 50 per cent of transactions through UPI below ₹200.

Czech Republic’s 17-year-old, Linda Fruhvirtova scripted a brilliant comeback to win the Chennai Open 2022 WTA 250 tennis singles. The teenager beat Magda Linette of Poland, the third seed, in the final. At 17 years and 141 days old, she is the youngest titlist of the season on the WTA Tour so far. She is the youngest singles champion on tour since Coco Gauff won Parma last year at 17 years, 70 days old.

India is set to host its maiden MotoGP World Championships race at the Buddh International Circuit in Greater Noida in 2023. MotoGP commercial rights owner Dorna and Noida-based race promoters Fairstreet Sports signed a Memorandum of Understanding (MoU) to host the premier two-wheel racing event in India for the next seven years.

The Indian Space Research Organization (ISRO) successfully tested a hybrid motor. This may lead to the development of a new propulsion system for the next launch vehicles. The Bengaluru-based space agency claimed that the 30 kN hybrid motor tested at the ISRO Propulsion Complex (IPRC) at Mahendragiri in Tamil Nadu is stackable and scalable.

Lt General V K Saxena inaugurated ‘We Care’ a community policing initiative here aimed at spreading awareness about various schemes of the Delhi Police among people. This initiative is inaugurated at an event organised at Kartvaya Path at India Gate on the occasion of ‘Sewa Divas, which is being celebrated to mark the 72nd birthday of Prime Minister Narendra Modi.

The SCALE (Skill Certification Assessment for Leather Employees) app was unveiled on September 20th by Minister of Education and Skill Development Dharmendra Pradhan at the Council of Scientific & Industrial Research (CSIR)-Central Leather Research Institute (CLRI) in Chennai. This app provides a one-stop solution for the education, testing, and employment requirements of the leather sector.

The women of Arthala village in Ghaziabad are fond of 27-year-old Uzma Kazmi; it was she who gave them better coping mechanisms for those “uncomfortable days” of the month by bringing affordable and environmentally friendly sanitary napkins, “Saraas,” within their grasp.

How to change the permalink structure on WordPress