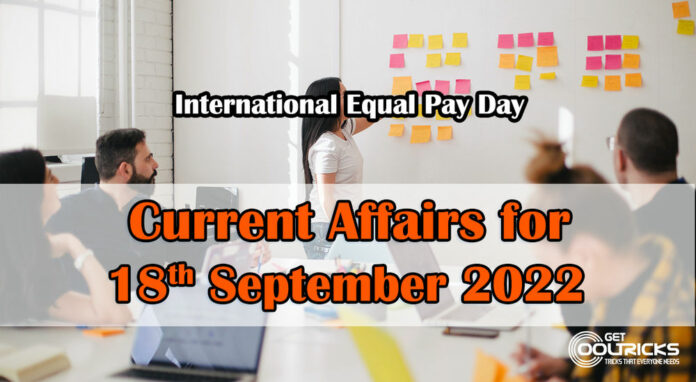 International Equal Pay Day, celebrated on 18 September, represents the longstanding efforts towards the achievement of equal pay for work of equal value. The symbolic day aims at highlighting issues related to the gender pay gap and raising worldwide awareness.

The main aim of the event is to end the history of gender discrimination that women are generally subjected to by getting paid less than their male counterparts.

World Bamboo Day 2022 is observed on September 18 in order to raise awareness about the conservation of this extremely useful plant. Conceptualised by the World Bamboo Organisation (WBO), this day also promotes the bamboo industry by highlighting its concerns.

Bamboo wood has long been used for various purposes in countries around the globe, especially in the east and southeast Asia. Bamboo grows on its and doesn’t require to be replanted, making it easily available.

Former President Ram Nath Kovind has launched a book titled ‘Ambedkar and Modi: Reformer’s Ideas Performer’s Implementation. The book, compiled by Bluekraft Digital Foundation, explores the life and works of Dr BR Ambedkar while drawing a parallel with the initiatives and reforms taken by Prime Minister Narendra Modi to implement the ideals of the social reformer.

The Society of Indian Automobile Manufacturers (SIAM) has elected Vinod Aggarwal as its new president for 2022-23.

The Finance Ministry has issued draft guidelines for Regional Rural Banks (RRBs) to raise resources from the capital market, paving the way for raising funds via a rights issue, private placement with select investors such as large banks and insurance companies, and initial public offerings (IPO).

Union Minister Dr Jitendra Singh has presented INSPIRE Awards to 60 startups along with financial support to 53,021 students, the Ministry of Science & Technology. The award is instituted by the Department of Science & Technology (DST), Government of India, and these innovators will be extended complete incubation support for their entrepreneurship journey.

Pratap Pawar, Chairman of Sakal Media, was elected chairman of ABC (Audit Bureau of Circulations) for 2022-2023.

PM launches the National Logistics Policy that seeks to address challenges facing the transport sector and bring down the logistics cost of businesses from 13-14 per cent to a single digit.

The Assam-based Numaligarh Refinery Limited (NRL) is expected to complete the construction of the India-Bangladesh Friendship Pipeline by the end of 2022.

The India-Bangladesh Friendship Pipeline Project (IBFPP) aims to connect Siliguri in West Bengal, India with Parbatipur in Bangladesh’s Dinajpur district. The total outlay of this project is Rs.346 crore.

Poland opens a new canal across the Vistula Spit

Poland has opened a new sea waterway to enable ships to sail from the Baltic Sea and the Bay of Gdansk to ports of Vistula lagoon without relying on the Strait of Pilawa in Russia.