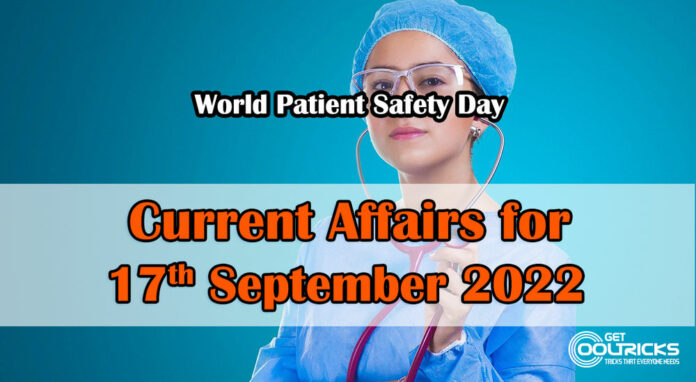 World Patient Safety Day is observed every year on 17 September to create awareness about different safety measures that should be taken to ensure patient safety.

This year, the theme of World Patient Safety Day 2022 is ‘Medication Safety’ along with the slogan ‘Medication Without Harm’ with a call to action to ‘Know, Check & Ask’. Medication errors and unsafe medication practices can lead to severe patient harm, disabilities, and deaths.

The day focuses on preventing and reducing risks, errors, and harm that patients face. In modern society, it is important to understand the implications of negligent patient care and work toward modern standards regarding patient care.

Constitution and Citizenship Day Celebrated on September 17, honours the document that guarantees Americans their essential rights. Since its ratification in 1787, the Constitution of the United States has served as the basis for all U.S. laws.

Eight African cheetahs are all set to move from Namibia into their new habitat at the Kuno National Park in Madhya Pradesh, on September 17, on Prime Minister Narendra Modi’s birthday.

The last cheetah in India died in 1947 in the Korea district in present-day Chhattisgarh, which was earlier part of Madhya Pradesh, and the species was declared extinct from India in 1952.

According to reports, the cheetah has lost 90 percent of its global habitat in the last 100 years. In addition, in many of the 31 populations of the cheetah, only 100-200 are left with their habitat consistently deteriorating.

The ‘African Cheetah Introduction Project in India‘ was conceived in 2009, with a plan to introduce the big cat by November last year in Kuno National Park. However, it suffered a setback due to the COVID-19 pandemic.

Kyrgyzstan reported “intense battles” with Central Asian neighbour Tajikistan and said 24 people had been killed in the latest outbreak of violence to hit the former Soviet Union. Both of the small impoverished landlocked nations have accused each other of restarting fighting in a disputed area, despite a ceasefire deal. In a statement, the Kyrgyz border service said its forces were continuing to repel Tajik attacks (Read More).

Health Minister Mansukh Mandaviya urges people to take part in the blood donation drive and donate blood to save lives. The citizens can register themselves on Aarogya Setu App or e-Raktkosh portal to donate blood as part of the ‘Raktdaan Amrit Mahotsav’.

Federal Bank was ranked 63rd on the Best Workplaces in Asia 2022 and becomes the only bank in India to be listed by Great Place to Work, the global authority on workplace culture. The list is based on over one million survey responses across Asia and West Asia, representing the experience of over 4.7 million employees in the region.

The Election Commission of India has released a new digital publication ‘BLO e-Patrika’ at an interactive session held with BLOs spread across the states in India.

In states/UTs, 50 BLOs from nearby states of Rajasthan, Uttar Pradesh, and Delhi joined the event physically at India Habitat Centre in New Delhi. Over 350 BLOs joined the meeting via video-conferencing from the office of Chief Electoral Officers (CEO).

The National Electoral Commission announced Joao Lourenco as the President with 51% of the votes. President Joao Lourenco is a member of the Popular Movement for the Liberation of Angola (MPLA), and he was re-elected as the President of Angola. The election results extended the hegemony of the MPLA, which is the only party that has governed Angola since its Independence from Portugal in 1975.

Air India, a Tata group-owned airline, unveiled a comprehensive Vihaan.AI to establish itself as a world-class global airline of Indian origin. The plan aims to focus on growing both its network and fleet, revamping its customer’s proposition, enhancing reliability and on-time performance, taking a leadership role in technology, sustainability, and innovation, and investing in the best talent in the airline industry.

United Nations International Children’s Emergency Fund (UNICEF) appointed Vanessa Nakate, a 25­-year­-old climate activist from Uganda as the Goodwill Ambassador of the UN Children’s Fund (UNICEF). Her collaboration with the organisation and recognising of her outstanding global advocacy for climate justice for current and future generations.