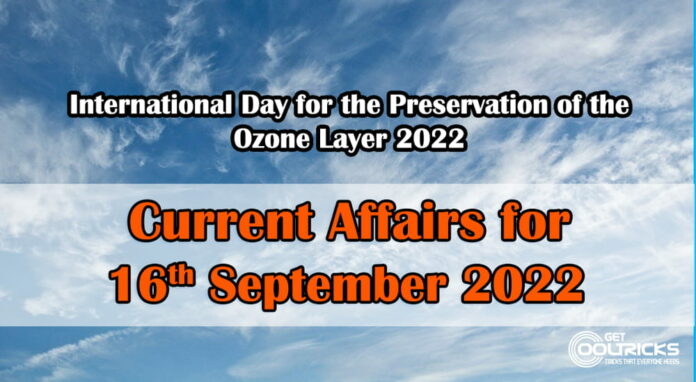 International Day for the Preservation of the Ozone Layer 2022

World Ozone Day or the International Day for the preservation of the Ozone Layer is observed on the 16th of September. The day aims to create awareness about the importance and need of the Ozone layer which is the single protection on Earth against UV rays coming out from the sun. The theme is ‘Global Cooperation Protecting Life on Earth.

The UN Environment Programme also aims to bring awareness about the importance of getting rid of the substances that damage the ozone layer. It also calls for taking time-targeted actions to protect Earth’s protective shield.

Prime Minister Narendra Modi arrived here to attend the Shanghai Cooperation Organisation (SCO) summit, which is set to deliberate on regional security challenges, boosting trade and energy supplies among other issues. The SCO is holding its first in-person summit in Samarkand in Uzbekistan after two years. The summit will also see the participation of Russian President Vladimir Putin and Chinese President Xi Jinping. Modi is also expected to hold bilateral meetings on the sidelines of the summit, including with Putin, and Uzbek President Shavkat Mirziyoyev among other leaders.

India’s most valuable brand is TCS

Kantar’s BrandZ report: IT services firm Tata Consultancy Services became India’s most valuable brand in 2022, according to a report by market data and analytics firm Kantar, displacing long-time topper HDFC Bank. TCS, with a brand value of $45.5 billion in 2022, is followed by HDFC Bank at $32.7 billion. HDFC Bank has held the No.1 position since the ranking was unveiled in 2014.

ICC Player of the month award for August 2022

Zimbabwe’s all-rounder Sikandar Raza and Australian all-rounder Tahlia McGrath have been declared the winners of the ICC Player of the month award for August 2022 in their respective categories. Raza has become the first Zimbabwe International to receive the honours and has been key for Zimbabwe during the month. Meanwhile, McGrath has also been a pivotal cog in the Australian team’s journey during August.

Jharkhand becomes the 3rd state to have Food Security Atlas

Jharkhand has become the third state after Bihar and Odisha in eastern India to have Food Security Atlas for its rural areas. Odisha and Bihar had their Atlas launched in 2018. Food Security Atlas of Rural Jharkhand 2022’ launched in Ranchi. Finance Minister of Jharkhand, Dr Rameshwar Oraon assured that the government would make efforts towards giving quota and green cards to the food insecure districts of Jharkhand.