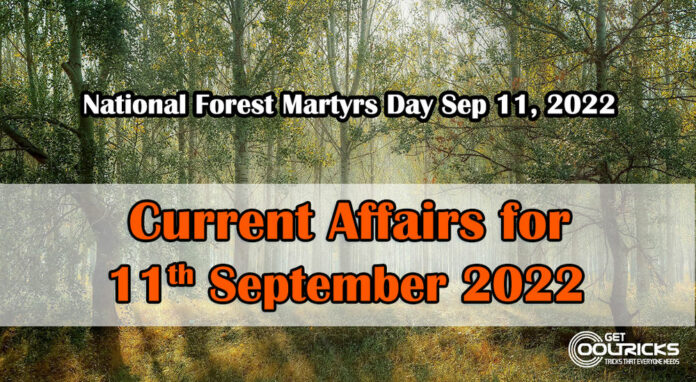 National Forest Martyrs Day is observed on September 11 to pay tribute to those who sacrificed their lives to protect forests and wildlife. The observance of the National Forest Martyrs is marked by several events aimed at creating awareness about protecting forests and the environment at large. The day holds a lot of significance in the present scenario when depleting green cover is among the greatest challenges in front of the world.

India’s indigenously-designed Nilgiri-class stealth guided-missile frigate ‘Taragiri’ has been launched on Sunday. It is the third stealth frigate built as part of Project 17A, under which a series of such frigates are being constructed. The 149-metre-long ship is propelled by two gas turbines and two main diesel engines and will be fitted with a supersonic surface-to-surface missile system.

World First Aid Day is celebrated every year on the second Saturday of September. This year, World First Aid Day 2022 falls on 10 September 2022. According to the IFRC, with this year’s theme, ‘Lifelong First Aid’, we are putting forward the importance of having lifelong first aid learning. The day is recognized worldwide to promote the significance of first aid, which is an important fundamental skill, and to create awareness on a global level about how it can save precious lives. The day was introduced first by the International Federation of Red Cross and Red Crescent Societies (IFRC).

Prime Minister Narendra Modi is all set to travel to Samarkand in Uzbekistan for the Shanghai Cooperation Organisation summit on September 15 and 16. This will be the first in-person summit after June 2019 when the SCO summit was held in Bishkek, Kyrgyzstan.

1. The Republic of India

2. The Republic of Kazakhstan

3. The People’s Republic of China

5. The Islamic Republic of Pakistan

7. The Republic of Tajikistan

8. The Republic of Uzbekistan

The organisation has two permanent bodies:

Americans remembered 9/11 on 11th Sept with readings of victims’ names, volunteer work and other tributes 21 years after the deadliest terror attack on US soil. A tolling bell and a moment of silence began the commemoration at ground zero in New York, where the World Trade Center’s twin towers were destroyed by the hijacked-plane attacks of Sept. 11, 2001. Victims’ relatives and dignitaries also convened at the two other attack sites, the Pentagon and a field in Pennsylvania.

India Bangladesh Relations: Ever since the Liberation War in 1971, Bangladesh and India have shared a special relationship not only due to their geographical boundaries but also largely owing to their shared cultural, linguistic and historical connections. India, during the war for the liberation of the Bangladeshi nation, provided much of the required humanitarian as well as militaristic support which was so duly needed at the time. Both countries since then, have shared a gigantic 4000 km long border which makes Bangladesh India’s longest land-sharing neighbour in the South Asian region.

How to create and implement AdSense Auto Ads