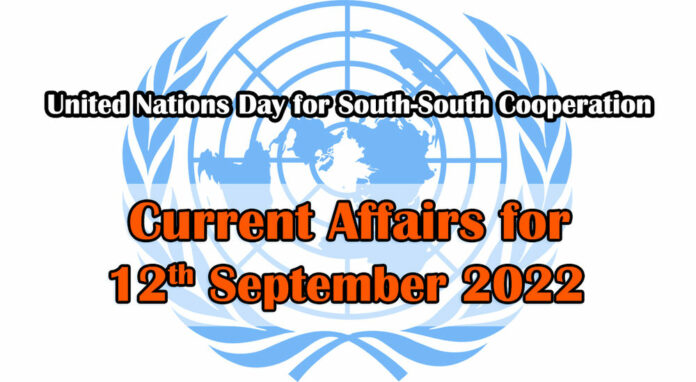 The United Nations Day for South-South Cooperation is observed annually on September 12 to highlight the importance of cooperation among people and countries in the global South. The day also aims at spreading awareness of the social, economic, and political developments made in the Southern region.

National Police Woman Day is celebrated each year on September 12. The day acknowledges and celebrates the contribution of female police officers who enforce law and order around the country. Today only roughly 10% of the police force in the United States is made up of women. National Police Woman Day hopes to rectify that by encouraging more women to join the service.

Meghalaya Chief Minister Conrad K Sangma launched an online portal of the Meghalaya Residents Safety and Security Act (MRSSA) in the presence of Home Minister Lakhmen Rymbui and other eminent officials in Shillong. The online portal will provide a digital platform to ensure the safety and security of the residents and act as a strong intelligence gathering system for authorities.

Prime Minister Narendra Modi inaugurated the International Dairy Federation’s World Dairy Summit (IDF WDS) 2022 at the India Expo Center and Mart in Greater Noida. At the rally, the prime minister said the dairy sector’s potential would not only boost the rural economy but would also be an important source of livelihood for millions of people around the world.

Agnikul was founded in 2017 by Srinath Ravichandran, Moin SPM and SR Chakravarthy (professor of IIT-Madras). In December 2020, Agnikul signed an agreement with the Indian Space Research Organisation (ISRO) under the IN-SPACe initiative to have access to the space agency’s expertise and its facilities to build rocket engines.

Indian Army’s Kharga Corps and the Indian Air Force have conducted a joint exercise ‘Gagan Strike’ in Punjab. The exercise, conducted over four days, comprised the deployment of attack helicopters as the aerial arm in support of ground forces carrying out drills, practising annihilation of enemy defences and deep penetration. It also showcased the precision firepower of the attack helicopters in coordination with ground forces’ mechanised columns.

SETU programme introduced in the US

To connect entrepreneurs in India with US-based investors, the commerce and industry minister Piyush Goyal has created a programme called SETU (Supporting Entrepreneurs in Transformation and Upskilling). With SETU, mentors in the US who are eager to support entrepreneurship can connect with Indian firms that are just getting off the ground. The initiative was introduced during a discussion centred on particular concerns with India’s startup ecosystem.

North Korea has approved a law that gives it the authority to launch a nuclear attack in advance. With the recently passed law, North Korea’s status as a nuclear weapons state has become irreversible. North Korea, this year tested a record number of weapons, including an intercontinental ballistic missile.

HPCL collaborates with the Indian Army for CSR Project

Hindustan Petroleum Corporation Ltd (HPCL) and the Indian Army have collaborated for implementing a CSR project to coach and mentor less privileged girl students in Kargil. The project is known as ‘Kargil Ignited Minds’, and the project aims to prepare 50 girl students for various national-level engineering and medical entrance examinations.