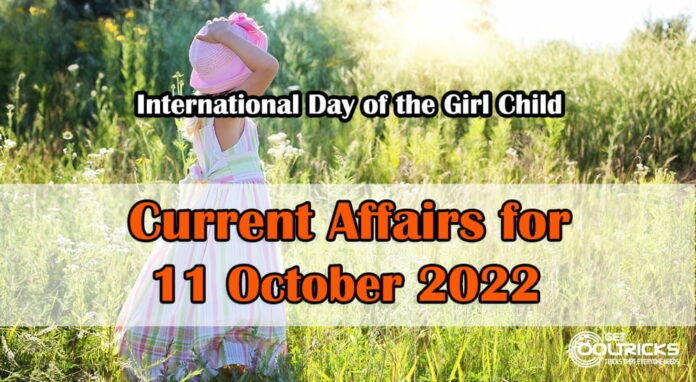 International Day of the Girl Child

Prime Minister Narendra Modi has declared Modhera village in poll-bound Gujarat as the country’s first 24×7 solar-powered village.
Modhera, which is famous for a centuries-old Sun temple built during the Chalukya, will also be known as a “solar-powered village”.

Union Minister of Road Transport and Highways Nitin Gadkari inaugurated the 81st annual session of the Indian roads Congress in Lucknow.
He was accompanied by the Chief Minister of Uttar Pradesh Yogi Adityanath.

India and Japan signed an MoU

India and Japan signed an MoU to develop scientific collaboration for Indian Ayurveda.
The National Institute of Advanced Industrial Science and Technology (AIST), Japan, and the All India Institute of Ayurveda (AIIA) signed a Memorandum of Understanding (MoU). The MoU aims to increase academic institutions’ technical capabilities and capacities.

ICICI Bank has introduced Smart Wire service, a novel approach to make SWIFT-based inward remittances easier and faster for its customers.
According to ICICI Bank, the first bank in the nation to introduce such a service, the Smart Wire Service will enable both NRIs and local clients to conduct inward remittance transactions electronically and without the use of paper.

Haryana Govt and Dubai ink an MoU for Economic Cooperation

Association of Mutual Funds in India

A Balasubramanian has been re-elected as the chairman of the Association of Mutual Funds in India (AMFI), and Radhika Gupta as the vice-chairperson of the industry body.