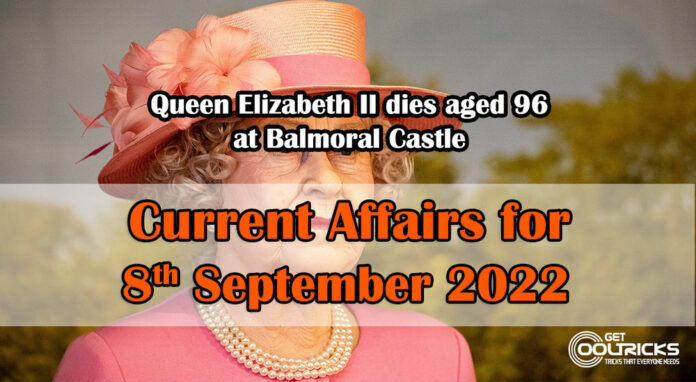 Queen Elizabeth II has died, at Buckingham Palace. Britain’s longest-reigning monarch passed away at the age of 96, after 70 years on the throne. She is succeeded by her eldest son and heir, the Prince of Wales, who becomes King Charles III.

International Literacy Day (ILD) is celebrated on 8 September every year all across the globe to make people aware of the meaning and importance of literacy for individuals and societies. This year’s International Literacy Day will be celebrated worldwide under the theme, “Transforming Literacy Learning Spaces” and will be an opportunity to rethink the fundamental importance of literacy learning spaces to build resilience and ensure quality, equitable, and inclusive education for all. The day spread awareness about the importance of literacy for individuals, communities, and societies and the need for intensified efforts toward more literate societies.

Union Cabinet approved the PM Schools for Rising India scheme(SHRI), a new centrally sponsored scheme that aims the development of more than 14500 schools across the country by strengthening select existing schools being managed by all forms of governments across the country.

International Travel Award 2023 For ‘Best Destination for Culture’ by PATWA

West Bengal has been accredited the International Travel Award 2023 for Best Destination for Culture by the Pacific Area Travel Writers Association (PATWA), an affiliate member of the United Nations World Tourism Organization (UNWTO).

The 7th Edition of BSX 2022, is organized in association with the Indian Science and Research Organization (ISRO), Indian National Space Promotion and Authorisation Centre (IN-SPACE), and NewSpace India Limited (NSIL). The 7th Edition of BSX 2022 is scheduled from 5th September to 7th September 2022 at BIEC in Bengaluru. Over 100 companies and organizations from around 15 countries participate in the exhibition to showcase advanced technologies and products for the space sector.

Warangal and two cities from Kerala have joined the UNESCO Global Network of Learning Cities (GNLC) in recognition of their outstanding efforts to make lifelong learning a reality for all at the local level. Warangal in Telangana, Thrissur and Nilambur are among the 77 cities from 44 countries which have joined this network of the world body.