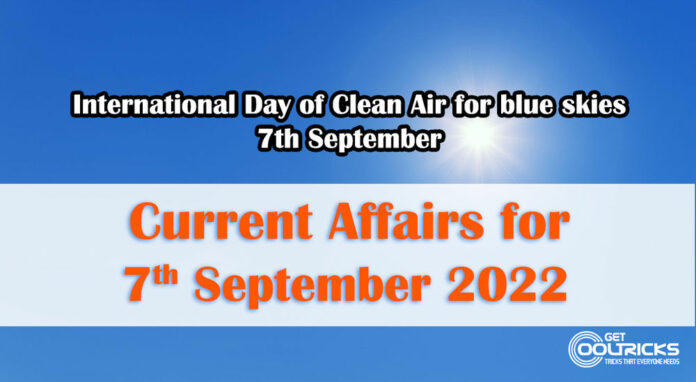 The International Day of Clean Air for blue skies is observed globally on September 07 to promote and facilitate actions to improve air quality. This year’s theme of “The Air We Share” focuses on the transboundary nature of air pollution, stressing the need for collective accountability and action. It also highlights the need for immediate and strategic international and regional cooperation for more efficient implementation of mitigation policies and actions to tackle air pollution.

Pallathuruthy Boat Club, Mahadevikadu Kattil Thekkethil Chundan has scripted its maiden triumph in the Nehru Trophy boat race for snake boats at the Punnamada Lake in Alappuzha. The club, led by Santhosh Chacko, completed a hat-trick of wins. A total of 77 boats, including 20 snake boats, competed in this year’s Nehru Trophy.

Uttar Pradesh Tops in Use of e-Prosecution Portal

Uttar Pradesh, with 9.12 million cases, ranks at the top in the number of disposal and entry of cases through the e-Prosecution portal managed by the Union government under its Digital India Mission.

The Karnataka government has appointed Kannada actor Kiccha Sudeep as the brand ambassador for “Punyakoti Dattu Yojana’ a cattle adoption scheme. The announcement was made by Animal Husbandry Minister Prabhu B Chavan.

In a meeting with the visiting Prime Minister of Bangladesh Sheikh Hasina, Prime Minister Narendra Modi said India and Bangladesh will soon commence negotiations on a Bilateral Comprehensive Economic Partnership Agreement (CEPA). “We both believe that by taking lessons from the Covid pandemic and recent global developments, we need to make our economies stronger.

The Fatehgarh Central jail in Uttar Pradesh’s Farrukhabad district has earned a five-star rating from the Food Safety Standards Authority of India (FSSAI) for the quality of food it serves to inmates.