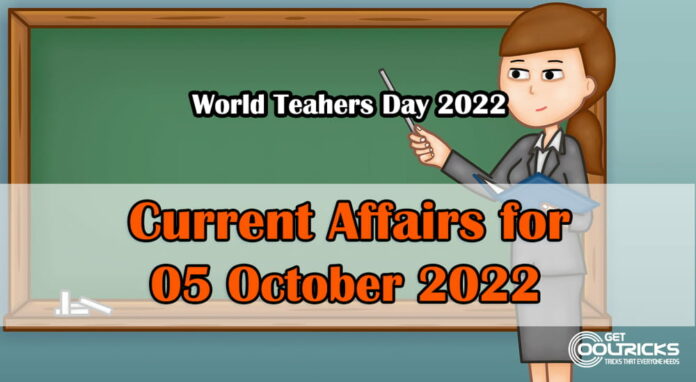 World Teachers’ Day or International Teachers’ Day is observed every year on October 5. This is a day to celebrate, thank and honour teachers for their contributions to their students.
This year marks the 28th anniversary of World Teachers’ Day and the theme is “The Transformation of Education Begins with Teachers”.

Breast Cancer Awareness Month (BCAM) is observed in the month of October, from 01 to 31. The annual international health campaign aims to increase awareness of the disease and to raise funds for research into its cause, prevention, diagnosis, treatment and cure. The pink ribbon is an international symbol of breast cancer awareness.

Prime Minister Narendra Modi on Himachal Pradesh played a Ransingha, a trumpet-like traditional instrument, gifted by CM Jai Ram Thakur . PM Modi  said, “This marks the beginning of each future victory.” He addressed a public rally at the Luhnu ground after inaugurating the AIIMS Bilaspur hospital and a hydro-engineering college.

About the Carolyn R. Bertozzi

About the Morten Meldal

About the K. Barry Sharpless

Oil prices rose to three-week highs, as OPEC+ agreed to its deepest cuts to production since the 2020 COVID pandemic, despite a tight market and opposition to cuts from the United States and others. Prices also rose on U.S. government data that showed crude and fuel inventories fell last week.
Brent crude rose $1.57, or 1.7%, to settle at $93.37 a barrel. Brent reached a session high of $93.96 per barrel, its highest since Sept. 15.

herSTART was recently launched by President of India, Draupadi Murmu.

Australia announced a plan to halt extinction of species.