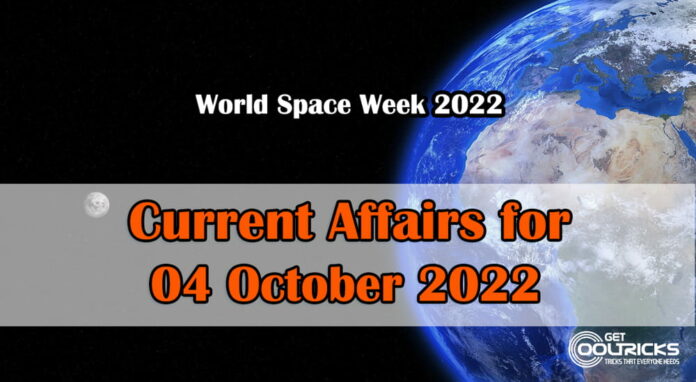 World Space Week (WSW) is observed every year from October 4 to 10, to celebrate science and technology, and their contribution towards the betterment of the human condition. World Space Week aims to help people gain a wider knowledge about space outreach and education.

The Telangana government has introduced ‘Aasara’ pensions as a part of the state’s welfare measures and social safety net strategy. The ‘Aasara’ pensions aim to secure life for all the poor. It is a welfare scheme for the older section of the state, widows, physically disabled, and beedi workers to avail pension facilities. Under the Asif Nagar Mandal jurisdiction 10,000 new Aasara pensions have been sanctioned.

The Prime Minister’s Scheme for Mentoring Young Authors, known as YUVA 2.0 (Young, Upcoming and Versatile Authors), was launched by the Department of Higher Education of the Ministry of Education on October 2. In order to promote India and Indian literature abroad, it is an author mentoring programme for young and aspiring writers (under 30 years old).

The National Mission for Clean Ganga (NMCG) has approved 14 projects worth Rs 1,145 crore. The projects include the following aspects sewerage management, curbing industrial pollution, and biodiversity conservation among others. The project was approved at the 45th meeting of the executive committee under the championship of G Asok Kumar, Director General, NMCG.

The Royal Swedish Academy of Sciences announced, the Nobel Prize in Physics 2022 was awarded to Alain Aspect (France), John F. Clauser (USA) and Anton Zeilinger (Austria) for their work on quantum mechanics.
The 2022 Nobel Prize in Physics has been awarded “for experiments with entangled photons, establishing the violation of Bell inequalities, and pioneering quantum information science,”.

This year’s Nobel Prize laureate John Clauser built an apparatus that emitted two entangled photons at a time, each towards a filter that tested their polarization. The result was a clear violation of a Bell inequality and agreed with the predictions of quantum mechanics.

Alain Aspect, developed a setup to close an important loophole. He was able to switch the measurement settings after an entangled pair had left its source, so the setting that existed when they were emitted could not affect the result.

Anton Zeilinger, 2022 Nobel Prize laureate in physics, researched entangled quantum states. His research group has demonstrated a phenomenon called quantum teleportation, which makes it possible to move a quantum state from one particle to one at a distance.

SC-ST hub conclave hosted by Ministry of MSME in Gujarat

The government-owned Punjab National Bank (PNB) announced that it has made banking services available to both clients and non-customers via WhatsApp. Customers must save the official PNB WhatsApp number (919264092640) and start a conversation by texting a hello or hi to this number in order to enable the banking feature on WhatsApp.

Vivek Lall, an Indian-origin General Atomic Global Corporation Chief Executive is honored with the Lifetime Achievement Award by US President Joe Biden with the citation of ‘With Grateful Recognition’. This citation was given to Vivek Lall, who has done a Ph.D. in Aerospace Engineering from Wichita State University in Kansas, by the AmeriCorps and the office of the President.

India will export missiles, rockets, and ammunition to Armenia after the recent clashes between Armenia and Azerbaijan. The missiles will also include Indigenous Pinaka Multi-Barrel Rocket Launcher. India has signed this deal with Armenia to help them to depend on the country against their neighboring country Azerbaijan.

How to Download Windows 10 ISO without using Media Creation Tool