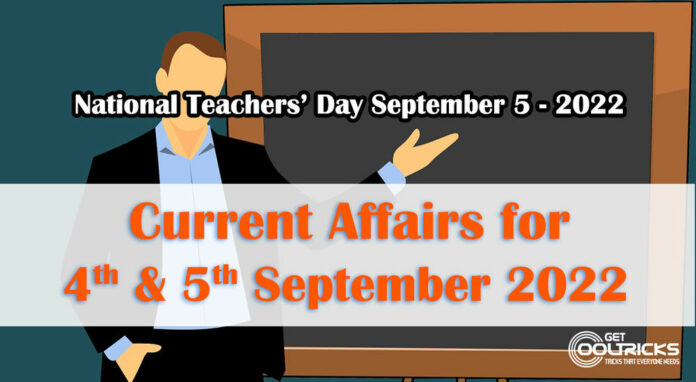 The theme for this year’s teachers’ day is ‘Leading in crisis, reimaging the future.’

Teachers’ Day or Shikshak Divas marks the birthday of the country’s first Vice President (1952–1962) who went on to become the second President of India (1962-1967), a scholar, philosopher, Bharat Ratna awardee, Dr Sarvapalli Radhakrishnan. He was born on September 5 in the year 1888. But teachers’ day was first observed in the year 1962 on his 77th birthday. He was a teacher who turned out to be a philosopher, scholar and politician. He dedicated his entire life to working toward the importance of education in people’s lives.

On this day, philanthropic and humanitarian efforts of any kind are honoured. September 5 was chosen to celebrate the day because it is Mother Teresa’s death anniversary. She devoted her life to charity and helping people in need. Her compassion and giving nature had made her a revered figure worldwide. Mother Teresa received the Nobel Peace Prize in 1979 for “work undertaken in the struggle to overcome poverty and distress, which also constitute a threat to peace.”

The Government of India approved the annual commemoration of “Hyderabad Liberation Day ” for the years 2022 to 2023. On September 17, 2022, the Ministry of Culture will organise the inaugural event for the year-long celebration of Hyderabad Liberation Day. The goal is to raise awareness of the tale of sacrifice, heroism, and resistance among the current generation in India as a whole as well as in the region.

Union Home Minister Amit Shah has launched the mascot and the anthem for the 36th National Games at Trans Stadia in Ahmedabad. The mascot is named ‘Savaj’ which means cub in Gujarati. The anthem for the national games is based on the theme of ‘Ek Bharat Shreshtha Bharat’. The National Games are going to be organized from 29th September 2022 to 12th October 2022. It will be played in six cities of Gujarat including, Ahmedabad, Gandhinagar, Surat, Vadodara, Rajkot, and Bhavnagar.

The Inflatable Aerodynamic Deceleration (IAD) was successfully tested by the Indian Space Research Organization (ISRO). It is specially designed for aerodynamically decelerating an object descending through the atmosphere. The IAD was folded and kept under the payload bay of a sounding rocket that was launched from TERLS Thumba.

India’s first-ever ‘night sky sanctuary’ will be set up within the next three months in Hanle, Ladakh, Union Minister of Science and Technology, Jitendra Singh. This is a unique and first-of-its-kind initiative by the Indian government. The proposed dark sky reserve will be located at Hanle, Ladakh, and will boost Astro-tourism in India, according to a statement released by the Union Ministry of Science and Technology.

Liz Truss has defeated Rishi Sunak to be the 3rd Female Prime Minister of the United Kingdom after a summer-long internal contest sparked by Boris Johnson’s resignation in July. After winning the leadership race, she vowed to press ahead with promises of tax cuts and to deal with a growing energy crisis.

The Indian government decided to rename Rajpath and the Central Vista lawns as ‘Kartavya Path’. The Rajpath was nearly a Hindi translation of the road named by the British as ‘Kingsway’. This comes amid a series of moves by the Modi government to erase images of colonial legacy in the national capital and beyond.

The Tamil Nadu government inaugurated the Schools of Excellence (SoE) and Model Schools Scheme, which is broadly based on schools in Delhi with upgraded infrastructure. The event was held at the state-run Bharathi Women’s College, Delhi Chief Minister Aravind Kejriwal launched the scheme here along with M K Stalin. As many as 26 Schools of Excellence and 15 Model Schools are covered under the scheme. ‘Thagaisal Palligal’ and ‘Mathiri Palligal’ are the official Tamil names for the SoE and Model Schools.

Stalin also launched the Moovalur Ramamirtham Ammayar memorial ‘Puthumai Penn’ (Modern Woman) Scheme, under the scheme, all girl students who studied from classes 6 to 12 in government schools would be paid Rs 1,000 per month directly into their bank account uninterrupted completion of their undergraduate degree, diploma and ITI courses. The students would be eligible for this assistance in addition to other scholarships. Through this programme, approximately 6,00,000 girl students could potentially benefit each year. For this new scheme, an amount of Rs 698 crore was allotted in the budget.

Former Congress president Rahul Gandhi’s mega “Mehngai par Halla bol” rally at the Ramlila maidan in New Delhi. The rally, in which party workers from Delhi, Uttar Pradesh, Haryana, and other states would be present, comes ahead of the grand old party’s “Bharat Jodo Yatra” from Kanyakumari to Kashmir starting September 7.