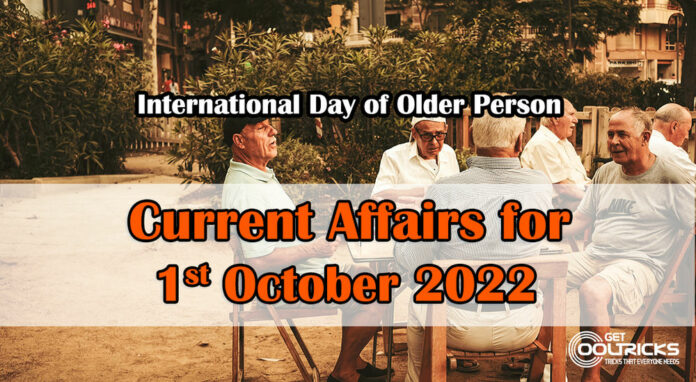 October 1 is observed as the International Day of Older Persons across the globe. The United Nations General Assembly introduced the day with the aim of honouring the contribution of older persons and looking into the problems that they face.
The Theme is “Resilience of Older Persons in a Changing World.” This theme will be celebrated by the NGO Committees on Ageing in New York, Geneva and Vienna.

International Coffee Day is observed on October 1, to celebrate and promote the use of coffee. The day is marked to celebrate “the coffee sector’s diversity, quality and passion.”

World Vegetarian Day is celebrated on the first day of October. It also kickstarts Vegetarian Awareness Month. This global day of advocacy and awareness celebrates the benefits of vegetarianism and encourages people to reduce their consumption of animal products.

A women’s rights activist from India, Srishti Bakshi has won the ‘Changemaker‘ award at the UN SDG (United Nations Sustainable Development Goals) Action Awards held at a ceremony in Bonn, Germany. The award is given to recognise the efforts of Srishti Bakshi to raise awareness of gender-based violence and inequality.

The election of N S Rajan, Director of August One Partners LLP, as Chairman of the Board of Governors of the Advertising Standards Council of India (ASCI) was done. At the board meeting that followed the 36th Annual General Meeting (AGM) of ASCI, Saugata Gupta, Managing Director & CEO, Marico Limited, was elected Vice-Chairman, and Shashidhar Sinha, Chief Executive Officer at IPG Mediabrands India, was named Honorary Treasurer.

The nation’s 5G services were officially inaugurated by Prime Minister Narendra Modi on October 1st, 2022, ushering in a period of ultra-high-speed mobile internet, according to a statement from the Prime Minister’s Office. The sixth iteration of the India Mobile Congress was also launched by PM Modi.

Vladimir Putin has declared the Annexation of 4 Ukrainian regions by Russia namely Donetsk, Luhansk, Kherson and Zaporizhia. The West has denounced the annexation of occupied Ukrainian territory by Russia as an illegitimate land grab after Russian President Vladimir Putin signed treaties.

Kazakhstan’s president, Kassym-Jomart Tokayev is to restore the former name of the country’s capital, Astana, just three years after he renamed it in honour of his predecessor.

World’s largest safari park to be developed in Gurugram