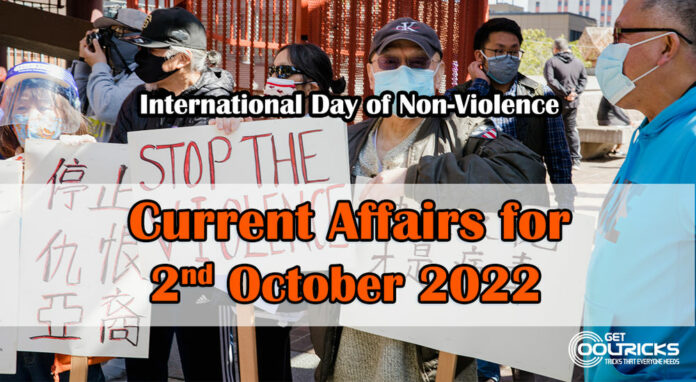 The International Day of Non-Violence is observed on 2nd October, the birthday of Mahatma Gandhi, leader of the Indian independence movement and pioneer of the philosophy and strategy of non-violence.
The day is observed to spread the message of non-violence through public awareness and education. It is commemorated with the hope of building a culture of peace, tolerance, understanding and non-violence. “Say No to Violence” is the essence of this day. Mahatma Gandhi was born on October 2, 1869. This year, Gandhi Jayanti will mark the 153rd birth anniversary of Mahatma Gandhi.

India celebrates the 118th birth anniversary of Lal Bahadur Shastri, the nation’s second Prime Minister. Shastri, who succeeded Jawaharlal Nehru, was respected for his forthrightness and honesty, and after his passing, he was awarded the Bharat Ratna, making him the first posthumous laureate of this prestigious award. Shastri has the same birthday (2 October) as Mahatma Gandhi even though he was born in 1904, 35 years later. He is also remembered for composing the slogan of “Jai Jawan, Jai Kisan”.

The celebration of 68th National Wildlife Week is observed all over India from 2nd to 8th October 2022. The main objective of this campaign is to promote the conservation and protection of animal life. It teaches people about animal life and encourages them to save a large number of animals by not killing them for their own food or for other purposes.

Since 1983, the annual observance of World Day for Farmed Animals (WDFA) on October 2nd (Gandhi’s birthday) has been offering people of conscience an opportunity to memorialize and mourn these innocent lives.
The day is organised by the International animal welfare organization, World Animal Protection along with Asia for Animals coalition to show the importance and urgency of farm animal welfare.