Terry Penchttp://www.androidrecovery.com
Terry is an author of Get Cool Tricks. He is curious about everything about technology, and has had experience in Windows computer, Android mobile phone, storage device and other cool tricks during work and free time. Stay connected with him on his social profiles. 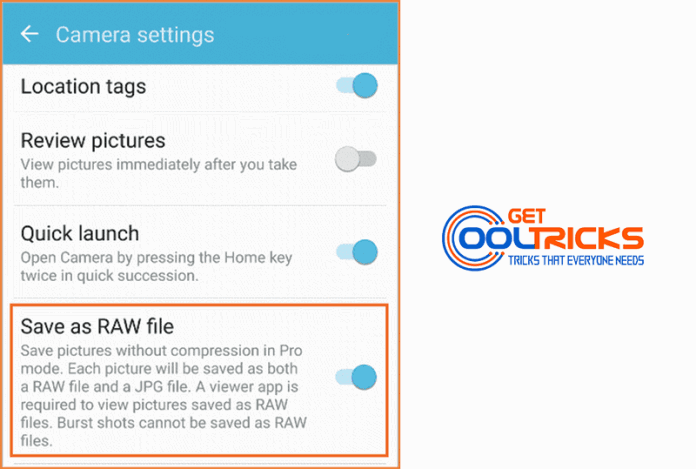 Since Android 5.0, people can take the RAW photo with Android mobile phones, some of them at least. The combination of RAW + JPEG gives mobile users more choices to capture pictures for various purposes. If you are not quite clear about the benefit of the RAW file, check this article. In this tutorial, we are going to show how to take the RAW photo with an Android mobile phone and related tips & tricks.

The following devices are reported to be able to take RAW photos, but the list definitely does not end. Please test your device by yourself.

How to Take RAW Photo with Samsung Galaxy

Where Are RAW Images Saved on Your Phone

RAW images are usually stored in phone internal memory: DCIM > Camera. This won’t change even if you set the storage location as an SD card in the camera app, mainly because the system opts to make sure it can save and access the RAW image at high speed. It worth mentioning that the JPG images you take in Pro mode will be saved in the default folder in internal memory too, but other than that, the JPGs will go to the external location you set.

How to Save RAW Photos to SD Card

If you really want to save RAW files to an SD card, there are actually several methods.

Other People are reading

Now you should know how to take RAW images with an Android mobile phone. If you have any problem with your smartphone, please tell us your phone model so that we can have a discussion.

Terry Penchttp://www.androidrecovery.com
Terry is an author of Get Cool Tricks. He is curious about everything about technology, and has had experience in Windows computer, Android mobile phone, storage device and other cool tricks during work and free time. Stay connected with him on his social profiles.