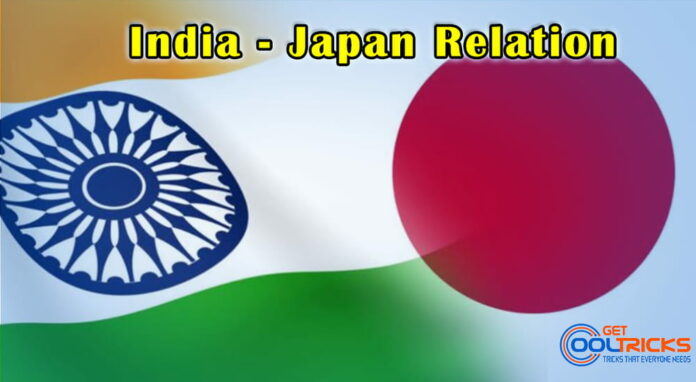 India-Japan exchanges have strengthened due to growing convergence on strategic matters; and its significance is growing from the common outlook on issues of peace, security, and stability of the Indo-Pacific Region.

The Tri-Service Exchanges between Japan and India have been institutionalized completing the triad. Coast Guards have had regular annual exchanges since 2006.

Malabar 2019 was conducted off Western Kyushu in the Sea of Japan in September 2019. INS Sahyadri and INS Kiltan participated in the exercise

India-Japan Digital Partnership (I-JDP) was launched during the visit of PM Modi to Japan in October 2018 furthering existing areas of cooperation as well as new initiatives within the scope of cooperation in S&T/ICT, focusing more on “Digital ICT Technologies”.

Reaffirming the Special Strategic and Global Partnership between India and Japan, the Prime Ministers concurred that the shared values and principles enunciated in the India-Japan Vision Statement issued in 2018 are particularly relevant in the present context, where global cooperation is required more than ever to address challenges that have become more acute.

Partnership for a free and open Indo-Pacific underpinned by Inclusiveness and Rules-based order:

Continuing bilateral and multilateral exercises including “Dharma Guardian” and “Malabar” respectively, while welcoming the participation of Japan for the first time in exercise MILAN, as well as making efforts to increase their complexity in the future.

Both countries affirmed the importance of bilateral and plurilateral partnerships among like-minded countries of the region, including the quadrilateral cooperation among Australia, India, Japan, and the United States (QUAD).

Supply Chain Resilience Initiative (SCRI): Launched by India, Japan, and Australia to counter China’s dominance of the supply chain in the Indo-Pacific region.

Acquisition and Cross-Servicing Agreement (ACSA): India-Japan logistics agreement was signed in 2020 for the armed forces of both countries to coordinate closely in services and supplies.

Special Strategic and Global Partnership: Upgradation of India-Japan relation in 2014.

India and Japan are common members of G 20, G 4, and the International Thermonuclear Experimental Reactor (ITER).