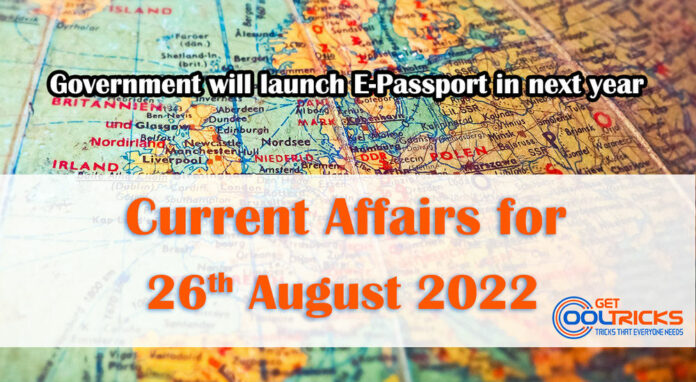 By the middle of this century, the entire Tibetan Plateau, also known as the “Water Tower” of Asia, will lose a substantial part of its water storage, a study has revealed. The study is the most comprehensive research on the issue to date and was published in the Natural Climate Change journal.

The young boys of Jamshedpur FC registered their first win of the ongoing Durand Cup 2022, thanks to an 84th-minute strike by substitute Tapan Halder in a Group A match against FC Goa here at Vivekananda Yuba Bharti Krirangan (VYBK) on Friday (August 26). Halder has also adjudged the player of the match for his winning goal.

Outgoing Chief Justice of India (CJI) N V Ramana Friday termed the pendency of cases as a “huge challenge” and rued that the judiciary has “fallen short of people’s expectations” at times. He also said the appointment of 11 Supreme Court and 224 high court judges during his tenure was a reflection of the “coherence and determination” of judges to strengthen the judiciary.

The state government of Tamil Nadu is all set to launch a universal family database. This scheme is going to help the government in relying directly on the real-time data available. With this scheme, Tamil Nadu will put its foot on the way to becoming a data-centric government soon.

One nation one fertilizer: Bharat Brand

One Nation One Fertilizer Scheme is going to be implemented in the country from 2nd October 2022. Under this scheme, all types of fertilizers will be sold in India under the same brand name ‘Bharat’. Also, the government renamed the fertilizer subsidy scheme Pradhan Mantri Bhartiya Januvar Pariyojana (PMBJP).

Researchers at the Indian Institute of Technology (IIT), Guwahati have developed an ultrasound-assisted fermentation method to produce a safe sugar replacement called “Xylitol” from bagasse, which is the residue left after crushing sugarcane.

The government will launch e-passport next year

Foreign Secretary Dr Ausaf Sayeed informed that the new age e-chip passport is likely to be launched by the end of the year 2022 or by the first week of January 2023. In this passport, the details of the applicant will be kept digitally in the chip which will be embedded in the passport booklet. It will provide a security upgrade for Indian passports and enable machine reading.

Mobile games based on freedom struggle

The story of the heroes of the Indian freedom struggle, the Union Minister for Information and Broadcasting, Shri Anurag Singh Thakur recently launched ‘Azadi Quest’, a series of online educational mobile games developed in association with Zynga

Former German Chancellor Angela Merkel has been awarded the 2022 UNESCO Peace Prize for her efforts to welcome refugees.