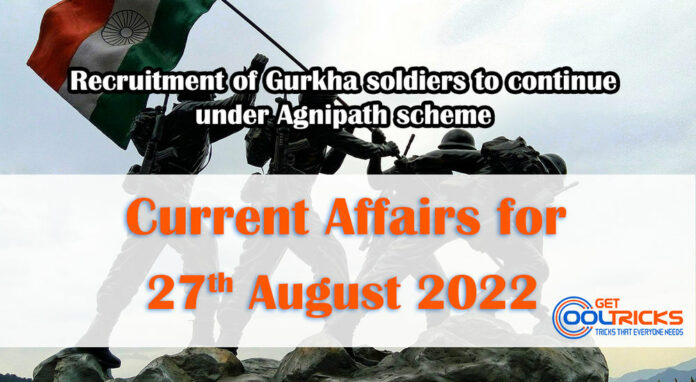 Marbat (statue) festival, India’s only tradition with a historical touch, is going to be celebrated in Nagpur on Saturday, August 27, 2022, for the first-time post-corona scare. Nagpur, August 26 (H.S.). As per the Shalivahan Shaka Panchag, the festival of Marbat is celebrated in Nagpur, Maharashtra on the second day of Shravan Amavasya.

This win is very important: Neeraj

Olympic Champion Neeraj Chopra has scripted history yet again, becoming the first Indian to clinch a Diamond League title by winning the Lausanne leg on Friday. The 24-year-old javelin thrower pulled out of the Birmingham 2022 Commonwealth Games due to a groin injury he had picked up while winning silver at the World Championships.

Nagaland gets its 2nd Railway station

Nagaland got its second Railway station on the Dhansari-Shokhuvi railway line after a gap of more than 100 years. Dimapur station was opened in 1903. Nagaland Chief Minister Neiphiu Rio officially flagged off the first passenger train service- the Donyi Polo Express from Shokhuvi Railway station in Choumukedima District on August 26.

Veteran RJD leader Awadh Bihari Chaudhary was unanimously elected as Speaker of the Bihar Legislative Assembly on Friday. The post had fallen vacant upon the resignation of Vijay Kumar Sinha, against whom a no-confidence motion was moved by the ‘Mahagathbandhan’ after it came to power in the state earlier this month. Chaudhary was escorted to the Chair by Chief Minister Nitish Kumar and Sinha, a senior BJP leader, who has now become Leader of Opposition. The proceedings were, however, marked by BJP members creating a ruckus over “dropping” from the list of businesses a report of the Ethics Committee.

Recruitment of Gurkha soldiers to continue under the Agnipath scheme

Regarding the recruitment of Gurkha soldiers from Nepal, India on Thursday said the process will continue under the newly-introduced Agnipath scheme. The scheme was launched on June 14 for all three Services. Ministry of External Affairs spokesperson Arindam Bagchi said on Thursday, “We have been recruiting Gurkhas soldiers to the Indian Army for a long time. We look forward to continuing to recruit Gurkha soldiers under the Agnipath scheme.”

India and Tanzania reviewed the entire spectrum of their bilateral defence and strategic ties during talks between Defence Minister Rajnath Singh and his visiting Tanzania counterpart Stergomena Lawrence Tax. The two leaders agreed to boost bilateral military-to-military cooperation in sync with India’s broader priority to deepen strategic ties with Africa.

India and Bangladesh have finalised the text of the Memorandum of Understanding (MOU) on interim water sharing of Kushiyara river and welcomed the finalization of the design and location of the water intake point on the Feni River to meet the drinking water needs of Sabroom town in Tripura as per the October 2019 India -Bangladesh MoU on this subject.

These developments took place here during the 38th Meeting of Ministerial-level Joint Rivers Commission of the two countries on Thursday, the ministry of external affairs said on Friday.  The Indian delegation was led by Union Minister for Jal Shakti Gajendra Singh Shekhawat and Zaheed Farooque, State Minister for Water Resources led the Bangladesh side.

“Conservation of the ecology and the environment must go hand in hand with the spirit of economic development and the fine balance between the two goals is what is sought to be achieved even now,” the bench headed by Chief Justice N V Ramana said. The bench, also comprising Justices Hima Kohli and CT Ravikumar, passed the order on pleas seeking the lifting of the ceiling limits of iron ore mining in these districts.

With drones or unmanned aerial vehicles (UAVs) playing a major role in modern-day warfare, the Indian Army is now inducting swarm drone systems. They will enhance the operational readiness of the forces deployed at the Line of Actual Control (LAC) facing China and the Line of Control (LOC) with Pakistan. Two Indian start-ups have manufactured this artificial intelligence (AI) enabled drones.