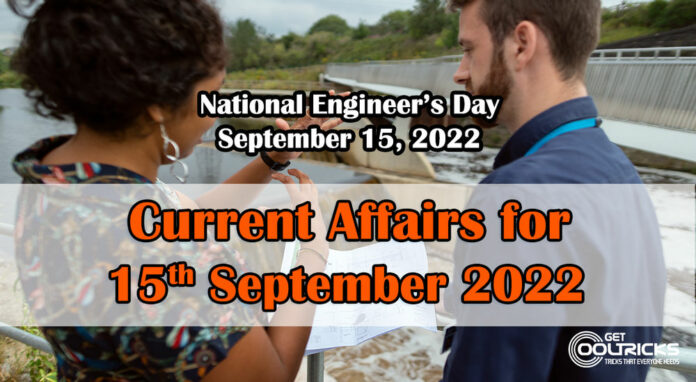 In India, Engineer’s Day is celebrated on September 15 every year. The day is celebrated to recognise the contribution of engineers to the development of the nation. This day commemorates the birth anniversary of Sir Moksha Gundam Visvesvaraya, who is considered one of the greatest engineers of India. Joining India, Sri Lanka and Tanzania also celebrate Engineers Day on September 15, 2022, in honour of Sir Moksha Gundam Visvesvaraya.

World Lymphoma Awareness Day (WLAD) is held on September 15 every year and is a day dedicated to raising awareness of lymphoma, an increasingly common form of cancer. It is a global initiative hosted by the Lymphoma Coalition. The day is dedicated to raising awareness about lymphoma and the particular emotional and psychosocial challenges facing patients and caregivers suffering from different forms of lymphoma.

The world’s largest museum of Harappan culture is coming up in Rakhigarhi, Haryana

Harappan Culture in Haryana:  The world’s largest museum of Harappan culture is coming up in Rakhigarhi in Haryana to showcase about 5,000-year-old Indus Valley artefacts. The village of Rakhigarhi was part of the Indus Valley Civilisation from 2600-1900 BC. Haryana is slated to host the world’s largest museum dedicated to the Harappan civilization. Rakhigarhi is a hamlet in Haryana’s Hisar district, some 150 kilometres from Delhi. The settlement is also a well-known archaeological site from the time of the Indus Valley civilization.

The country has become power surplus, we have connected the whole country into one grid, and strengthened the distribution system. These steps have increased power availability to 22 hours in rural areas and 23.5 hours in urban areas. The next step is to take it to a 24X7 guaranteed power supply at an affordable price.

Indore will create history by implementing a fully digital addressing system, making it the first city in India to do so. The smart city advanced significantly when a memorandum of understanding was signed with the firm Pataa Navigations. The Memorandum of Understanding is signed by Rajat Jain, co-founder of Pataa Navigations, and Rishav Gupta (IAS), CEO of Indore Smart City.

Pataa has developed patented technology and is working with the Indian Space Research Organization (ISRO) to develop a digital addressing system for the nation. Pataa is a brief and distinctive code, comparable to KUMAR100, SINGH221, or other commonly used codes, that will help the user find the specific geotagged location.

Axis Bank and Square Yards launched ‘Open Doors’, a co-branded Home Buyer Ecosystem. The ‘Open Doors’ platform will ensure that the complete journey from searching to buying one’s dream home becomes an efficient and delightful experience for the customers. Axis Bank and Square Yards have created a digital-first solution to simplify the customer journey. These digital platforms reflect the cultural alignment between the two organizations.

EKI Energy Services, a developer and seller of Carbon credits, announced that it is the first company to record an Indian plastic project under a global accreditation standard.

Vinesh Phogat won bronze at the World Wrestling Championship 2022 in the women’s 53kg category. Vinesh Phogat became the first Indian woman wrestler to win two medals at the World Championship. She also became the first Indian woman to win a gold medal at both the Commonwealth and Asian Games. At Commonwealth Games 2022, she won the gold medal in the women’s 53 kg freestyle wrestling category.