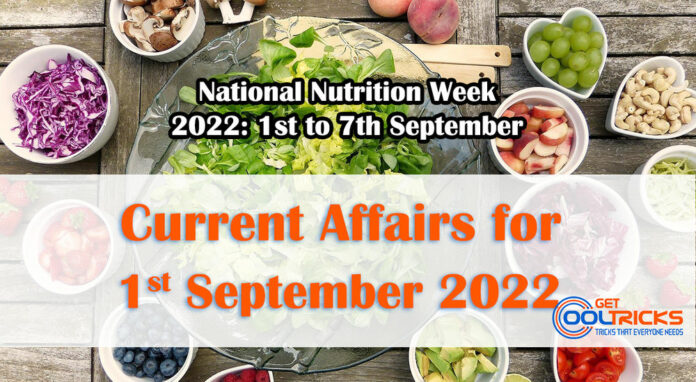 In India, the first week of September every year is celebrated as National Nutrition Week. The week is observed every year from September 1-7. The theme for this year is Celebrate a “World of Flavors”.The purpose of this week is to raise awareness among the general public about the value of healthy eating practices and proper nutrition for upholding a healthy lifestyle. The government launches programmes to promote nutrition awareness throughout this week.

Tata Steel and Punjab Govt sign an MoU: The Tata steel company and the Punjabi government have agreed to establish a 0.75 million tonne per year (MnTPA) long products steel facility with an electric arc furnace (EAF) powered by scrap. Tata Steel’s decision to build the greenfield facility at Kadiana Khurd in Ludhiana’s Hitech Valley is a part of the company’s commitment to investing in a circular economy and switching to low-carbon steel making through steel recycling.

Rajasthan Chief Minister Ashok Gehlot has launched ‘Mahila Nidhi’, a loan scheme for the social and economic development of women through loans. Under the scheme, apart from everyday necessities, easy credit will be available to women for business expansion and starting new businesses. In the budget 2022-23, the government said it will establish ‘Mahila Nidhi’ through Rajasthan Rural Livelihood Development Council. Rajasthan is the second state in the country after Telangana, where Mahila Nidhi has been established.

ICICI Bank and NMDFC ink an Agreement: The National Minorities Development and Finance Corporation (NMDFC) announced that it had entered into an agreement with ICICI Bank for the creation of mobile applications and financial accounting software. According to a formal announcement, ICICI Bank will develop, construct, and deploy the application for NMDFC in addition to giving source code and executable database data, among other things.

University Grants Commission (UGC) will now monitor and resolve all grievances of students and staff in varsities through a centralised portal called `e-Samadhan`. This platform ensures transparency, prevents unfair practices in Higher Education Institutions and provides a time-bound mechanism for the redressal of grievances, according to the UGC. The commission has merged its existing portals and helplines except for the anti-ragging helpline and developed the new portal.

The Jammu & Kashmir Police has launched an online Mobile application “JK Ecop”. The App enables the common citizens to use a host of services ranging from registering a complaint to downloading a copy of an FIR. A citizen can also make requests like obtaining a character certificate, employee verification, or tenant verification through this App. Details about missing persons and unidentified dead bodies etc. can also be obtained through this portal.

Andhra Pradesh signs MoU with Parley for the Oceans

Andhra Pradesh government has signed a Memorandum of Understanding with the ‘Parley for the Oceans’, a U.S.-based company that works for plastic-waste management. The minister of Municipal Administration and Urban Development (MA&UD) Audimulapa Suresh, MAUD Principal Secretary, Y.Sri Lakshmi, and Founder of Parley for the Oceans, Cyrill Gutsch. The MoU was signed under the presence of Chief Minister of Y.S. Jagan Mohan Reddy and an event was held at the AU Convention Centre in Vishakhapatnam.

Reliance Industries chairman Mukesh Ambani has announced to build of India’s first and one of the world’s largest Carbon Fibre plants at Hazira, Gujarat. The plants will have a capacity of 20,000 MTPA based on Acrylonitrile feedstock. Overall, in the Oil to Chemical segment (O2C), Ambani Ambani announced an investment of Rs 75,000 crore over the next five years to expand capacities in existing and new value chains. These value chains are – Polyester value chain, Vinyl chain, and New Materials. The first phase of the plant will be completed in 2025.

On August 1, 2022, the NSCN (I-M) observed the 25th anniversary of the “Indo-Naga” ceasefire with the release of a booklet titled “25 Years of Indo-Naga Ceasefire (1997-2022)”.The NSCN-IM signed a ceasefire agreement with the Government of India on July 25, 1997, which became effective on August 1, 1997. This heralded the start of Indo-Naga peace talks. It opened an avenue in the search for a solution to the long-standing political demands of Nagas living across the region between India and Myanmar.

The world’s largest religious monument is expected to cost $100 million and replace Cambodia’s 400-acre-large Angkor Wat temple complex. In addition to becoming the largest religious monument in the world, the Temple of Vedic Planetarium in West Bengal, which will serve as the headquarters of the International Society of Krishna Consciousness (ISKCON), will also have the world’s biggest dome.

Indian Railways have set up ‘Meghdoot’ machines at Dadar, Thane and other stations of the Mumbai Division. The unique ‘Meghdoot’ machines use innovative technology to convert water vapour in the air into potable water. The contract for setting up 17 ‘MEGHDOOT’, Atmospheric Water Generator Kiosks over Mumbai Division of Central Railway under NINFRIS policy for a period of 5 years has been awarded to Maithri Aquatech Pvt Ltd.

Delhi Chief Minister Arvind Kejriwal has launched a virtual school and students from across the country will be eligible for admission. The application process for the Delhi Model Virtual School (DMVS) began on August 31. The school is for Classes 9-12. Admission to the schooling platform will be open for students across India and they will also be prepared by experts for entrance exams like NEET, CUET and JEE along with skill-based training.

After refusing access to US and UK ships to its ports earlier this month, the Solomon Islands has now temporarily halted all naval visits. The Pacific Island country’s Prime Minister Manasseh Sogavare made the announcement hours after the US embassy in Canberra, Australia said it had been informed that US Navy ships would be barred from docking in the country’s ports. Observers believe that the country’s move is a departure from the norm and raises concerns about China’s growing influence in the country and the region at large.