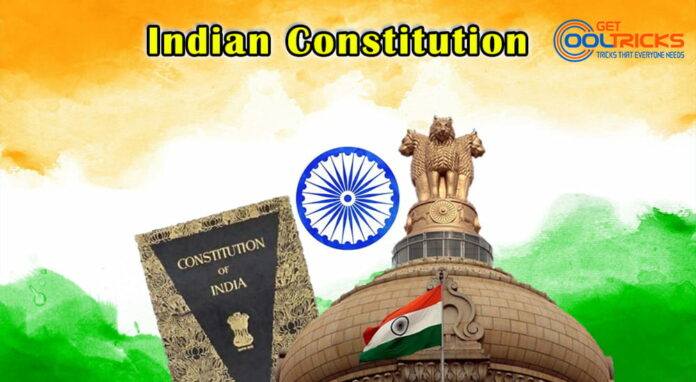 PART XIII: TRADE, COMMERCE AND INTERCOURSE WITHIN THE TERRITORY OF INDIA

301 Freedom of trade, commerce and intercourse.

302 Power of Parliament to impose restrictions on trade, commerce and intercourse.

303 Restrictions on the legislative powers of the Union and of the States with regard to trade and commerce.

304 Restrictions on trade, commerce and intercourse among States.

305 Saving of existing laws and laws providing for State monopolies.

307 Appointment of authority for carrying out the purposes of articles 301 to 304.

PART XIV: SERVICES UNDER THE UNION AND THE STATES

309 Recruitment and conditions of service of persons serving the Union or a State.

310 Tenure of office of persons serving the Union or a State.

311 Dismissal, removal or reduction in rank of persons employed in civil capacities under the Union or a State.

312A Power of Parliament to vary or revoke conditions of service of officers of certain services.

315 Public Service Commissions for the Union and for the States.

316 Appointment and term of office of members.

317 Removal and suspension of a member of a Public Service Commission.

318 Power to make regulations as to conditions of service of members and staff of the Commission.

319 Prohibition as to the holding of offices by members of the Commission on ceasing to be such members.

323B Tribunals for other matters.

324 Superintendence, direction and control of elections to be vested in an Election Commission.

325 No person to be ineligible for inclusion in, or to claim to be included in a special, electoral roll on grounds of religion, race, caste or sex.

326 Elections to the House of the People and to the Legislative Assemblies of States to be on the basis of adult suffrage.

327 Power of Parliament to make provision with respect to elections to Legislatures.

328 Power of Legislature of a State to make provision with respect to elections to such Legislature.

329 Bar to interference by courts in electoral matters.

330 Reservation of seats for Scheduled Castes and Scheduled Tribes in the House of the People.

331 Representation of the Anglo-Indian community in the House of the People.

332 Reservation of seats for Scheduled Castes and Scheduled Tribes in the Legislative Assemblies of the States.

333 Representation of the Anglo-Indian community in the Legislative Assemblies of the States.

334 Reservation of seats and special representation to cease after sixty years.

335 Claims of Scheduled Castes and Scheduled Tribes to services and posts.

337 Special provision with respect to educational grants for the benefit of the Anglo-Indian Community.

338A National Commission for Scheduled Tribes.

338A National Commission for Backward Classes.

340 Appointment of a Commission to investigate the conditions of backward classes.

342A Socially and educationally backward classes.

CHAPTER I: LANGUAGE OF THE UNION

343 Official language of the Union.

344 Commission and Committee of Parliament on official language.

345 Official language or languages of a State.

346 Official language for communication between one State and another or between a State and the Union.

347 Special provision relating to language spoken by a section of the population of a State.

348 Language to be used in the Supreme Court and in the High Courts and for Acts, Bills, etc.

349 Special procedure for enactment of certain laws relating to language.

350 Language to be used in representations for redress of grievances.

350A Facilities for instruction in mother tongue at the primary stage.

350B Special Officer for linguistic minorities.

351 Directive for development of the Hindi language.

353 Effect of Proclamation of Emergency.

354 Application of provisions relating to the distribution of revenues while a Proclamation of Emergency is in operation.

355 Duty of the Union protects states against external aggression and internal disturbance.

356 Provisions in case of failure of constitutional machinery in States.

357 Exercise of legislative powers under Proclamation issued under article 356.

358 Suspension of provisions of article 19 during emergencies.

359 Suspension of the enforcement of the rights conferred by Part III during emergencies.

360 Provisions as to financial emergency.

361 Protection of President and Governors and Rajprakukhs.

361A Protection of publication of proceedings of Parliament and State Legislatures.

361B Disqualification for appointment on a remunerative political post.

363 Bar to interference by courts in disputes arising out of certain treaties, agreements, etc.

363A Recognition granted to Rulers of Indian States to cease and privy purses to be abolished.

364 Special provisions as to major ports and aerodromes.

365 Effect of failure to comply with, or to give effect to, directions given by the Union.

PART XX: AMENDMENT OF THE CONSTITUTION

368 Power of Parliament to amend the Constitution and procedure therefor.

370 Temporary provisions with respect to the State of Jammu and Kashmir.

371 Special provision with respect to the States of Maharashtra and Gujarat.

371A Special provision with respect to the State of Nagaland.

371B Special provision with respect to the State of Assam.

371C Special provision with respect to the State of Manipur.

371D Special provisions with respect to the State of Andhra Pradesh.

371F Special provisions with respect to the State of Sikkim.

371G Special provision with respect to the State of Mizoram.

371H Special provision with respect to the State of Arunachal Pradesh.

371-I Special provision with respect to the State of Goa.

371J Special provision with respect to the State of Karnataka.

372 Continuance in force of existing laws and their adaptation.

372A Power of the President to adapt laws.

373 Power of the President to make orders in respect of persons under preventive detention in certain cases.

375 Courts, authorities and officers to continue to function subject to the provisions of the Constitution.

376 Provisions as to Judges of High Courts.

377 Provisions as to Comptroller and Auditor-General of India.

378 Provisions as to Public Service Commissions.

378A Special provision as to the duration of the Andhra Pradesh Legislative Assembly.

392 Power of the President to remove difficulties.

394A Authoritative text in the Hindi language.