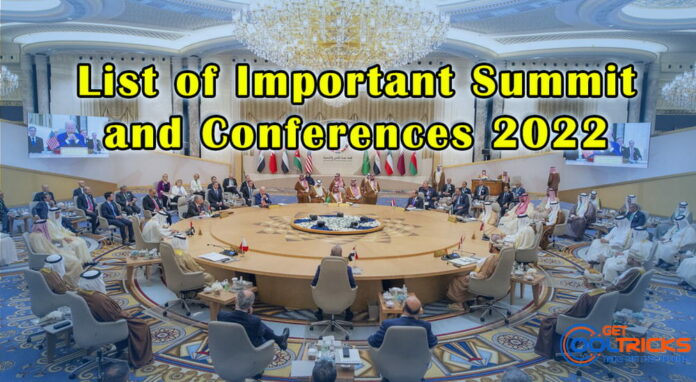 Summits/conferences like G 20, BRICS, ASEAN, NAM, G7 etc. are held on a regular intervals. Here We provide the details of the Summit and conference in the month of January, February and March 2022.

1.19th India-US Military Cooperation Group Meeting
Location – Agra, Uttar Pradesh
The discussion was co-chaired by the Chief of Integrated Defence Staff to the Chairman Chiefs of Staff Committee (CISC) Air Marshal BR Krishna from the Indian side and his US counterpart Stephen D Sklenka.

2. The fifth session of the United Nations Environment Assembly (UNEA-5.2)
Location – hybrid form in Nairobi, Kenya
held on February 28 – March 2, 2022 on the theme ‘Strengthening Actions for Nature to Achieve the Sustainable Development Goals’. It was held in Nairobi, Kenya.
UNEA-5.2 was followed by a Special Session of the UNEA, [email protected], commemorating the 50th anniversary of the creation of UNEP in 1972. It was also held online and in person in Nairobi on March 3-4, 2022 under the overall theme of ‘Strengthening UNEP for the implementation of the environmental dimension of the 2030 Agenda for Sustainable Development’.
Heads of State, Ministers of environment and other representatives from 175 nations endorsed a historic resolution titled ‘End Plastic Pollution: Towards an internationally legally binding instrument’ to end plastic pollution and forge an international legally binding agreement by 2024.
Special Session [email protected] was attended by Environment Minister Bhupender Yadav.

3. 2022 Mobile World Congress
Location – Barcelona, Spain
The Global System for Mobile Communications Association(GSMA) has organised the 2022 Mobile World Congress (MWC), which took place in Barcelona, Spain from 28 February to 3 March.
The MWC-22 focused on increasing the global connectivity of the 5G network and economic recovery.
Global Mobile Economy Report expects 5G connections globally to reach 1 billion in 2022 by 5G adoption.
An increase in the 5G network connection will increase the global GDP by 5% up to $5 trillion in 2025.
Global telecom industry to invest $600 billion till 2025 in the global mobile industry’s capital expenditure (CAPEX) and 85% of it will be spent on 5G.

4. India Global Forum (IGF) annual summit
Location – Bengaluru
The summit will bring together eminent faces of tech-driven disruption and those who have joined the unicorn club along with Union ministers, policymakers, and global business leaders.
This comes as the first-of-its-kind confluence, particularly after the incentives announced by Finance Minister Nirmala Sitharaman in the budget. The theme of the summit is ‘The New India Inc.’

5. Meeting of G7 agriculture ministers
Location – Hosted by Germany
German government has announced that it will host a virtual meeting of agriculture ministers from the G7 countries to discuss the impact of the Russia-Ukraine conflict on world food security.
The German Minister of Agriculture and Food, Cem Özdemir, said that the meeting would also focus on how to stabilize food markets. Germany holds the rotating presidency of the Group of Seven most-advanced economies this year.

6. 36th International Geological Congress
Location – New Delhi
It will be held virtually from the 20th to the 22nd of March 2022. It is also known as the Olympics of Geosciences.
It is a joint endeavour of the Ministry of Mines, the Ministry of Earth Sciences, the Indian National Science Academy and the Science Academies of Bangladesh, Nepal and Sri Lanka. They are held quadrennial under the International Union of Geological Congress (IUGS).
Theme: Geosciences: The Basic Science for a Sustainable Future

8. 73rd Annual National Conference of Indian Psychiatric Society (ANCIPS)
Location – Visakhapatnam
Experts from various parts of India and a few from abroad are participating in the three-day conference held at Vizag Conventions at Madhurawada. The last national conference was held 37 years ago in Visakhapatnam.
The focus areas would be on drug and alcohol abuse in society, stress among students and growing incidence of suicides, depression and anxiety, old-age problems and dementia.
The national conference, being hosted jointly by IPS, A.P. State branch, Government Hospital Mental Care and Visakha Psychiatric Society, will be inaugurated by Justice P. Laxmana Reddy, Lokayukta of Andhra Pradesh.
The theme is chosen for ANCIPS 2022: ‘Bridging minds … Connecting generations’

9. 5th BIMSTEC Summit
Location – hosted by Sri Lanka
Prime Minister Shri Narendra Modi will attend the 5th BIMSTEC Summit on 30 March 2022. The Summit Meeting will be hosted by Sri Lanka virtually, the current BIMSTEC chair. External Affairs Minister S Jaishankar will also visit Sri Lanka from March 28 to March 30 where he will attend the meeting of the BIMSTEC Foreign Ministers.