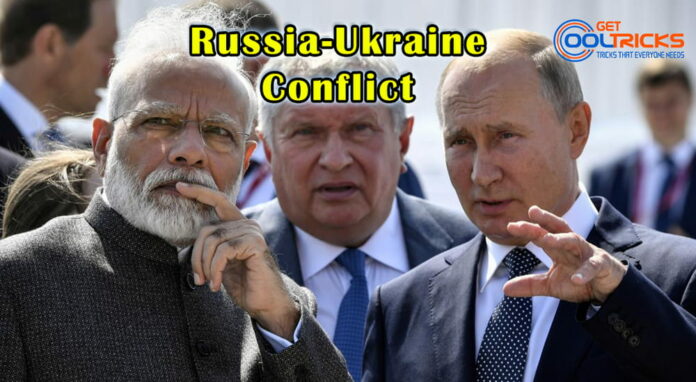 Going forward, India’s stand on the Ukraine war will depend on how and when the war ends ultimately.

New Delhi, the Ukraine war has complicated its geopolitical calculation in more ways than one.

I.It has frustrated India’s regional geopolitical interests. In the wake of the US withdrawal from Afghanistan in August 2021, India was keen on nurturing its interests in Afghanistan and Central Asia in cooperation with Russia.

President Vladimir Putin’s December 2021 visit to New Delhi, the two sides agreed on a number of joint projects in Central Asia and exchanged views on how to secure their respective interests in Afghanistan. This was significant, given the concern in New Delhi that the return of the Taliban to power would enable Pakistan and China to keep India out of Afghanistan and the larger region.

Reaching out to old friend Russia was considered to be a way of overcoming the regional handicap after the US and its allies left Kabul in a hurry.

India’s “mission central Asia”, if not its interests in Kabul where New Delhi had exhibited great flexibility and reached out to the Taliban.

II.The longer the war continues, the less able India will be to balance its relations with Russia and with the US-led coalition that is helping Ukraine resist the Russian invasion.

India viewed Russia as a partner that would be helpful to have in the Asian continental theatre and as a steady defence supplier (even though the Russian share in India’s defence basket was already coming down).

On the other hand, India looked at the US and its allies as helpful in the maritime domain in the Indo-Pacific in checking Chinese aggression. This useful balancing act that India adopted without too much pressure from either side came under immense stress immediately after the Russian attack on Ukraine.

III.The ongoing war will further complicate India’s calculations regarding China. New Delhi knew that the growing Sino-Russian relations could potentially prevent Russia from standing by India in the event of a conflict with China. Yet, before the war there was hope that Russia might be in a position to mediate in a conflict between the two sides.

Russia, it was hoped, would increase its cooperation with India in its neighbourhood and in the broader region. The war has shattered both of these hopes. A Russia weakened by the Ukraine war will not be able to either mediate between India and China or indirectly help India’s engagement of Eurasia, which will now be increasingly dominated by China.

IV. The war has complicated India’s post-COVID economic recovery. Global oil prices have seen a steady rise since the February invasion of Ukraine.

The cost of a barrel of brent crude stood at $99 on the day of the invasion. It rose by 25 per cent to $123 by the end of May. The global rise in crude oil prices has pushed up energy import bills. The war has also led to a significant outflow of foreign capital from India.

In fact, the Indian rupee has witnessed considerable depreciation, and inflation has spiked. A particular concern has been the rise in food and commodity prices. The cumulative effect of the rising fuel prices, the outflow of foreign investments, and the strengthening of the dollar have been the steady decline in the value of the rupee.

On April 6, Jaishankar stated in Parliament:

Soon after, Jaishankar said at the United Nations Security Council in New York that the conflict was a matter of “profound concern” for the global community.

In other words, there has been a marked change in India’s response to the Ukraine war since February this year.

Indeed, New Delhi’s deft use of the rhetoric of “national interest” has, to a great extent, depressing criticism of its position both domestically and internationally.

This logic of national interest can be seen in the major geopolitical changes that are taking place in the broader region. New Delhi, in the context of these changes, feels it must be agile in its response to developments such as the Ukraine war.

In particular, the US withdrawal from continental Asia and, to some extent, from West Asia, will, New Delhi reasons, will lead to a potential rise in China-led regional orders.

Given that India is geographically located at the confluence of these geopolitical shifts, New Delhi while making its geopolitical choices, will need to keep in mind the US’ diminishing role and China’s rising influence in the region.

In the broader region, India is caught in the whirlwind of a number of geopolitical contestations:

China’s aggressive rise, displacing India from its traditional sphere of influence in South Asia and in the Indian Ocean region; the Taliban’s return in Afghanistan, where India suddenly finds itself friendless after having invested over US$3 billion in development assistance; the potential coming together of countries such as China, Pakistan, Afghanistan, Iran and Russia to fill the regional power vacuum under Chinese leadership.

Russia, perhaps, is the only country that is not unfriendly. While it may not go to the extent of opposing China in trying to help, India can ill afford another unfriendly neighbour in the region.

If India were to condemn Russia, it would end up with another hostile power in an already hostile neighbourhood. If it supported Russia, it would have lost the political and diplomatic support of the US and the West vis-à-vis China.

New Delhi’s response to the Russian aggression against Ukraine appears to have been shaped by harsh geopolitical circumstances.

Its early position on the war, which reflected an intention to balance the two sides, was possibly shaped by a belief that the war would be a quick affair.

However, with the war dragging on, Russia facing military reverses, and pressure mounting on India from its partners in the West, New Delhi appears to be slowly changing its stance. No doubt, this war will not only have implications for India-Russia relations but also for India’s geopolitical interests, particularly in continental Asia.