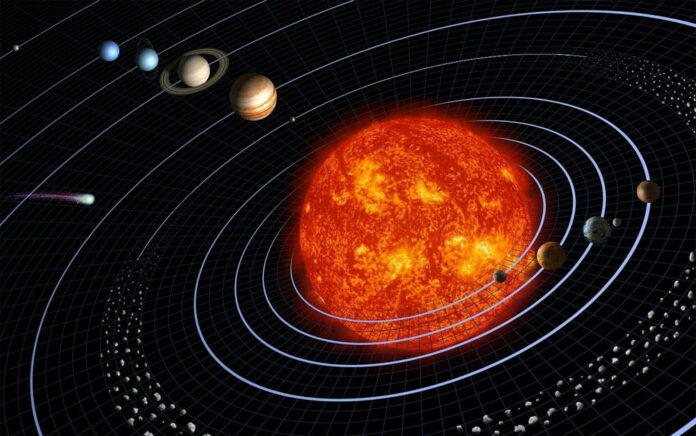 The four Smaller Inner Planets are

The Four Outer Or Giant Planets are

The asteroid Belt which lies between the orbits of Mars and Jupiter mostly contains objects composed, like the terrestrial planets, of rock and metal.

The solar wind, a stream of charged particles flowing outwards from the Sun, creates a bubble-like region in the interstellar medium known as the heliosphere.

The Sun is the Solar System’s star and by far its most massive component. Its large mass (332,900 Earth masses), which comprises 99.86% of all the mass in the Solar System, produces temperatures and densities in its core high enough to sustain nuclear fusion of hydrogen into helium, making it a main-sequence star. This releases an enormous amount of energy, mostly radiated into space as electromagnetic radiation peaking in visible light.

The inner Solar System is the region comprising the terrestrial planets and the asteroid belt. Composed mainly of silicates and metals, the objects of the inner Solar System are relatively close to the Sun; the radius of this entire region is less than the distance between the orbits of Jupiter and Saturn. This region is also within the frost line, which is a little less than 5 AU (about 700 million km) from the Sun.

Asteroids except for the largest, Ceres, are classified as small Solar System bodies and are composed mainly of refractory rocky and metallic minerals, with some ice. They range from a few metres to hundreds of kilometres in size. Asteroids smaller than one meter are usually called meteoroids and micrometeoroids (grain-sized), depending on different, somewhat arbitrary definitions.

The outer region of the Solar System is home to the giant planets and their large moons. The centaurs and many short-period comets also orbit in this region. Due to their greater distance from the Sun, the solid objects in the outer Solar System contain a higher proportion of volatiles, such as water, ammonia, and methane than those of the inner Solar System because the lower temperatures allow these compounds to remain solid.

The four outer planets, or giant planets (sometimes called Jovian planets), collectively make up 99% of the mass known to orbit the Sun. Jupiter and Saturn are together more than 400 times the mass of Earth and consist overwhelmingly of hydrogen and helium; Uranus and Neptune are far less massive (<20 Earth masses each) and are composed primarily of ices. For these reasons, some astronomers suggest they belong in their own category, “ice giants”. All four giant planets have rings, although only Saturn’s ring system is easily observed from Earth. The term superior planet designates planets outside Earth’s orbit and thus includes both the outer planets and Mars.

Beyond the orbit of Neptune lies the area of the “trans-Neptunian region”, with the doughnut-shaped Kuiper belt, home of Pluto and several other dwarf planets, and an overlapping disc of scattered objects, which is tilted toward the plane of the Solar System and reaches much further out than the Kuiper belt. The entire region is still largely unexplored. It appears to consist overwhelmingly of many thousands of small worlds—the largest having a diameter only a fifth that of Earth and a mass far smaller than that of the Moon—composed mainly of rock and ice. This region is sometimes described as the “third zone of the Solar System”, enclosing the inner and the outer Solar System.

The Kuiper belt is a great ring of debris similar to the asteroid belt, but consisting mainly of objects composed primarily of ice. It extends between 30 and 50 AU from the Sun. Though it is estimated to contain anything from dozens to thousands of dwarf planets, it is composed mainly of small Solar System bodies. Many of the larger Kuiper belt objects, such as Quaoar, Varuna, and Orcus, may prove to be dwarf planets with further data. There are estimated to be over 100,000 Kuiper belt objects with a diameter greater than 50 km, but the total mass of the Kuiper belt is thought to be only a tenth or even a hundredth the mass of Earth.

The dwarf planet Pluto (39 AU average) is the largest known object in the Kuiper belt. When discovered in 1930, it was considered to be the ninth planet; this changed in 2006 with the adoption of a formal definition of planet. Pluto has a relatively eccentric orbit inclined 17 degrees to the ecliptic plane and ranging from 29.7 AU from the Sun at perihelion (within the orbit of Neptune) to 49.5 AU at aphelion. Pluto has a 3:2 resonance with Neptune, meaning that Pluto orbits twice round the Sun for every three Neptunian orbits. Kuiper belt objects whose orbits share this resonance are called plutinos.

Charon, the largest of Pluto’s moons, is sometimes described as part of a binary system with Pluto, as the two bodies orbit a barycentre of gravity above their surfaces (i.e. they appear to “orbit each other”). Beyond Charon, four much smaller moons, Styx, Nix, Kerberos, and Hydra, orbit within the system.

Eris (68 AU average) is the largest known scattered disc object, and caused a debate about what constitutes a planet, because it is 25% more massive than Pluto and about the same diameter. It is the most massive of the known dwarf planets. It has one known moon, Dysnomia. Like Pluto, its orbit is highly eccentric, with a perihelion of 38.2 AU (roughly Pluto’s distance from the Sun) and an aphelion of 97.6 AU, and steeply inclined to the ecliptic plane.