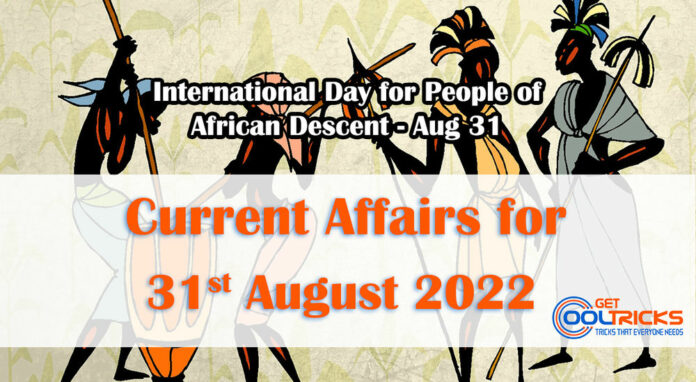 India’s Gautam Adani is now the third richest person in the world. The rankings by Bloomberg Billionaires Index come as business conglomerate Adani Group’s chairman overtakes Louis Vuitton chairman Bernard Arnault. With a total net worth of USD 137.4 billion, 60-year-old Adani is now just behind business magnate Elon Musk and Jeff Bezos in the ranking. This is the first time an Asian person has broken into the top three of the Bloomberg Billionaires Index.

Director of the Department of Economic & Policy Research(DEPR), Reserve Bank of India (RBI), Dr Ashutosh Raravikar has authored a new book titled “Indian Banking in Retrospect – 75 years of Independence”. The book is published by Aswad Prakashan Private Limited. Bibek Debroy, Chairman of the Economic Advisory Council to the Prime Minister of India has written the book’s foreword.

The Athletics Federation of India (AFI) announced its collaboration with HSBC India in order to support Indian women athletes, particularly the young ones. Under the terms of the cooperation, talented girls will be chosen from the Under-14 and Under-16 National Inter District Championships and trained to compete on a worldwide scale.

The 10th National Maritime Search and Rescue Exercise SAREX-22 was carried out by the Indian Coast Guard (ICG) in Chennai. Along with other organisations and foreign participants, the chief of the Indian Coast Guard, VS Pathania, assessed the exercise “SAREX-2022.” In an emergency, ICG Dornier aircraft demonstrated to viewers how to rescue passengers from ships and aeroplanes.

Clear Skies for Tomorrow: IndiGo, the largest airline in the nation, announced that it has joined a sustainable effort led by the World Economic Forum (WEF). IndiGo airline has joined the Clear Skies for Tomorrow, India Coalition initiative as a signatory. IndiGo’s dedication to deploying sustainable initiatives would help to achieve a substantial scale for SAF (Sustainable Aviation Fuel) to attain a critical mass and bring in cost-efficiency for wide adoption in India.CEO of InterGlobe Aviation Limited which operates IndiGo: Ronojoy “Rono” Dutta

Rajasthan chief minister Ashok Gehlot has inaugurated a month-long Rajiv Gandhi Rural Olympic Games in Jodhpur. The village Olympics is expected to see the participation of 44,000 villages across Rajasthan, with nearly 30 lakh people across various age groups already registering themselves for the games. Out of the 30 lakh participants, 9 lakh are women.

New Naval ensign to be unveiled by PM Modi, INS Vikrant to be launched

Prime Minister Narendra Modi will reveal a new ensign of the Indian Navy (New Naval ensign), at the aircraft carrier INS Vikrant Commissioning celebration on September 2. He will formally inaugurate the nation’s first aircraft carrier, INS Vikrant. The Indian Navy will receive a New Naval ensign on September 2 without the Saint George’s cross that has been on its flag since the British placed it during the pre-independence era.

The 67th Filmfare Awards ceremony, presented by The Times Group, honoured the best Indian Hindi-language films of 2021. Held at Jio World Centre, the 67th Filmfare Awards honour the films released in 2021. At a press conference helmed by the editor of Filmfare magazine, Jitesh Pillai revealed Wolf777news as the title sponsor. Bollywood actors Ranveer Singh and Arjun Kapoor were announced as co-hosts.

The 50th All Manipur Shumang Leela Festival 2021-2022 kicked off at Iboyaima Shumang Leela Shanglen at Palace Compound in Imphal. Manipur Governor La Ganesan and Chief Minister N. Biren Singh attended the inaugural function. Shumang Leela is a traditional form of theatre in Manipur and the roles of female artists are all played by male actors and male characters are played by female artists in the case of female theatre groups. Shumang Leela Groups of the early stage attempted to preserve and promote humanism, tolerance, confidence, devotion, truth and justice through their performances

Prime Minister Narendra Modi has dedicated India’s first earthquake memorial, named Smruti Van at Bhuj in Gujarat. Smruti Van is a unique memorial carrying the names of more than 12 thousand people who lost their lives in the devastating earthquake that struck here in January 2001. The earthquake simulator will provide a real experience of earthquake tremors to visitors. Gujarat Chief Minister Bhupendra Patel and State BJP President C. R. Patil was present on the occasion