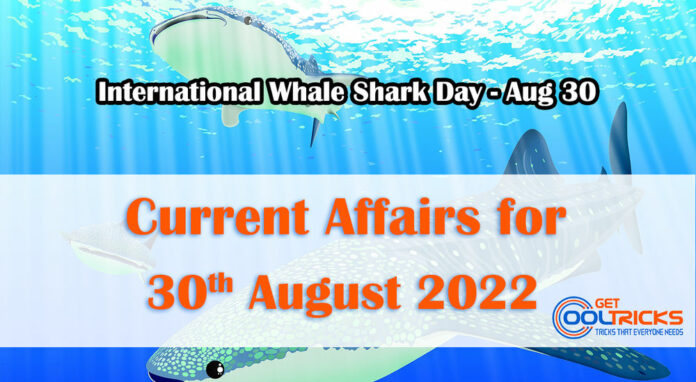 A Workshop on Development of Enterprises and Services Hub (DESH) Bill, 2022 was organized by the Department of Commerce

In India, the National Small Industry Day is celebrated on 30 August every year, to support and promote small Industries for their overall growth potential and opportunities received for their development in the year. The day recognises the contribution of small industries to the country’s growth. The day is also an opportunity for the central and state governments to encourage and support small industries. These small businesses offer employment to a large number of people in India.

South Korea has once again shattered its own record for the world’s lowest fertility rate. South Korean women were estimated, based on 2021 data, to have an average of just 0.81 children over their lifetimes, down from 0.84 a year earlier. The number of newborns declined in 2021 to 260,600, which equates to about 0.5% of the population.

The world’s first fleet of hydrogen-powered passenger trains was launched by Germany. The first fleet of hydrogen-powered passenger trains has replaced 15 diesel trains that were previously operated on nonelectrified tracks in Lower Saxony, Germany. The engine of the trains is powered by electricity generated using hydrogen fuel cells.

India has for the first time referred to what it called “the militarization of the Taiwan Strait”, marking a rare instance of New Delhi appearing to comment on China’s actions towards Taiwan. The Indian High Commission in Sri Lanka released a statement in which India accused China of “militarizing the Taiwan Strait.”The Taiwan Strait is a 180-kilometre wide strait separating the island of Taiwan and continental China (and Asia of course). The strait is part of the South China Sea and connects to the East China Sea to the north.

The NITI Aayog has declared the holy city of Haridwar in Uttarakhand as the best aspirational district on five parameters. The letter by NITI Aayog’s Aspirational Districts Programme director Rakesh Ranjan to Uttarakhand chief secretary SS Sandhu and the district collector of Haridwar underlines that the district has secured the first rank in basic infrastructure theme and has become entitled to receive an additional allocation of Rs 3 crore

In Gujarat’s Ahmedabad city, Prime Minister Narendra Modi will officially open the pedestrian-only “Atal Bridge” over the Sabarmati River. PM Modi is at his home state for a two-day visit. Later, PM Modi made a spur-of-the-moment trip to the bridge. According to a press release, the Atal Bridge connects the upcoming arts and culture centre on the eastern end of the riverfront with the flower garden on the western end. Atal Bridge is nearly 300 metres long and 14 metres wide in the middle.

The most recent report tracking the performance of the industry by Benori Knowledge, a cutting-edge provider of custom research and analytics solutions, highlighted the life insurance sector’s growth at a CAGR of 11% from 2017-2022 and is projected to grow at a CAGR of 9% in the following five years. The COVID-19 pandemic’s unpredictability made it more important than ever for customers to spend money on items that would strengthen their financial security, one of which is life insurance.

Uttarakhand Chief Minister Pushkar Singh Dhami has launched the “Mukhyamantri Udyaman Khiladi Unnayan Yojana” on the occasion of National Sports Day. The Chief Minister Sports Development Fund will be established to be given financial benefits to the students according to accelerated rules

Bengaluru ranks second in the Asia Pacific region in the top tech hubs list and is only behind China’s Beijing, according to a report by Cushman and Wakefield. The report, called ‘Tech Cities: The Global Intersection of Talent and Real Estate, studied as many as 115 different ‘tech cities across the globe. After Beijing and Bengaluru, the list has three other Indian cities, Chennai, Delhi and Hyderabad. Mumbai and Pune also made it to the top-10 list with the eighth and ninth positions in a list of 14 cities from the APAC