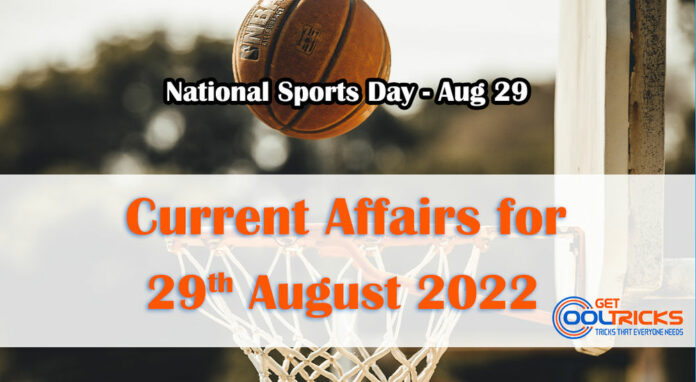 The National Sports Day (NSD) is celebrated every year in India on the 29th of August to mark the birth anniversary of legendary hockey player Major Dhyan Chand, who was known as ‘The Wizard’ or ‘The Magician’ of hockey for his superb ball control

More than 60 million inhabitants of the Indo-Gangetic plain (IGP) are exposed to enormous concentrations of atmospheric health hazardous Black carbon (BC), a sooty material emitted by fossil fuels and the burning of agricultural waste among others, a study conducted by an international team, including researchers from IIT Kharagpur. The black carbon leaves the natives of this region which has populous rural areas as well as mega cities vulnerable to various cardiovascular diseases (CVDs), particularly during winter times.

UNESCO to adopt ICH dossiers in regional languages from now

The cultural identity and basic flavour of any community remained intact, UNESCO will accept International Cultural Heritage (ICH) dossiers in the language of the practitioners along with English or French versions for evaluation. This was informed by Tim Curtis, Secretary, Convention for Safeguarding the Intangible Culture Heritage, UNESCO at an event here to celebrate the successful inscription of ‘Durga Puja in Kolkata’ on the Representative List of ICH of Humanity in 2021.

The 13th Edition of India-US joint exercise between the elite commandos of their respective Special Forces named ‘VAJRA PRAHAR’ 2022 focussing on fighting terrorism culminated at Bakloh (HP). This annual exercise is hosted alternatively between India and the United States. The 12th edition was conducted at Joint Base Lewis Mc Chord, Washington (USA) in October 2021. The exercise VAJRA PRAHAR with the US Special Forces is significant in terms of security challenges faced by both nations in the backdrop of the current global situation.

While appreciating the use of mobile technology and localised innovative ways in ‘Anganwadi Kendra’s in the country to fight malnutrition among children, Prime Minister Narendra Modi on Sunday also asked people to popularise ” healthy millet-made dishes” on social media ahead of the festivals season and before the commencement of the UN-announced ‘Millet-year’ 2023. Modi said that millets- the coarse grain- of which India is the ” largest producer” in the world have been categorised as “superfood”.

Addressing people in his monthly radio talk ‘man ki Baat, the Prime Minister touched on a range of issues including the countrywide “josh” for the tricolour in the celebrations of ‘Amrit Kal’ and the need for water conservation and resurrecting water bodies all over the country.

Paytm has appointed financial services veteran GS Sundararajan to its board as an Independent Director, the firm said in a filing with the stock exchanges. Sundararajan is the former CEO and MD of Fullerton India Credit Company and the former MD of asset-based finance business for Citibank India. Paytm’s Independent Director Mark Schwartz will retire after his tenure ends

Hyderabad’s first state-run water school has been opened in the Durgam Cheruvu area of Madhapur in which water sports such as sailing, kayaking, windsurfing, and stand-up paddling will be taught. The school will be opened initially for underprivileged students and later in the subsequent two weeks, it will be opened to the general public

Around 100 families from nearby apartments who were asked to vacate their homes ahead of the Supertech twin towers’ demolition in Noida have returned to their places. Apex (32 storeys) and Cyane (29 storeys) were demolished in 12 seconds on Sunday. The area around the collapsed buildings has been barricaded by the police

75 high-burden tribal districts have been selected by the Ministry of Tribal Affairs and the Central TB Division of the Ministry of Health and Family Welfare to become TB free in the coming months.

The International Day Against Nuclear Tests is observed every year across the world on 29 August to raise awareness about the effects of nuclear weapon test explosions or any other nuclear explosions.