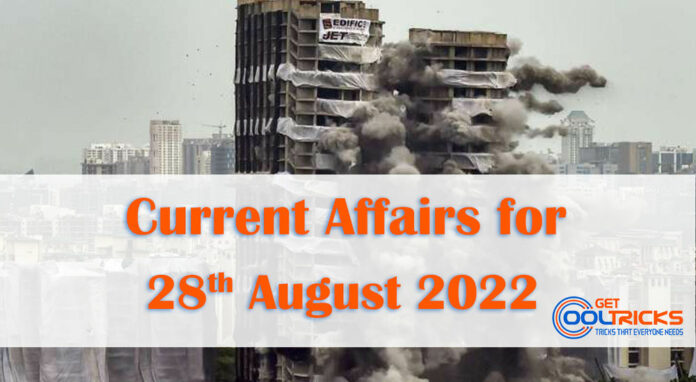 It took 12 seconds to raze Supertech twin towers in Noida to the ground on Sunday, said Jet Demolitions Managing Director Joe Brinkmann. While the twin towers’ demolition largely remained successful, a boundary wall of a nearby residential society suffered damage while windowpanes of several apartments developed cracks. The two towers were rigged with over 3,700 kg of explosives. The towers collapsed straight down in what is called the “waterfall technique”.

Justice UU Lalit was sworn in as the 49th CJI

Justice Uday Umesh Lalit was on Saturday sworn in as the 49th Chief Justice of India (CJI). President Droupadi Murmu administered the swearing-in oath during a brief ceremony held at the Rashtrapati Bhavan.

Satellite imagery showed widespread destruction at a giant military facility in western Syria targeted in a recent Israeli airstrike, and the head of a Syrian opposition war monitor said Sunday the strike targeted a depot housing hundreds of middle-range missiles for Iran-backed fighters.

Syrian state media reported after the Thursday night attack near the cities of Tartus and Hama that two people were wounded and fires were sparked in nearby forests.

Recently Africa adopted a pen-plus strategy at the 72nd session of the Regional Committee of the United Nations World Health Organization (WHO) held in Lomé, Togo.

Sameer V Kamat, Director General, Naval Systems and Materials Division of DRDO, was recently appointed as the new Chairman of DRDO. Kamat will continue in this post till the age of 60 years or till further orders. The same, the current secretary G. Satheesh Reddy was appointed Scientific Advisor to the Defense Minister.

Former Chief Economic Adviser of India K. Subramaniam was recently appointed as the Executive Director of India at the International Monetary Fund (IMF). He will replace Surjit S Bhalla, who was appointed as India’s executive director on the board of the IMF in 2019.

K. Subramaniam’s tenure in this post will start from November 1, 2022, and will continue for a period of three years or till further orders, whichever is earlier.

Uttar Pradesh Chief Minister Yogi Adityanath had talked about issuing a ‘UP Parivar Kalyan Card’ soon for all the families of the state. Under this, the benefits of various welfare schemes running in the state can be availed. This will also help those families who are deprived of the schemes due to any reason.