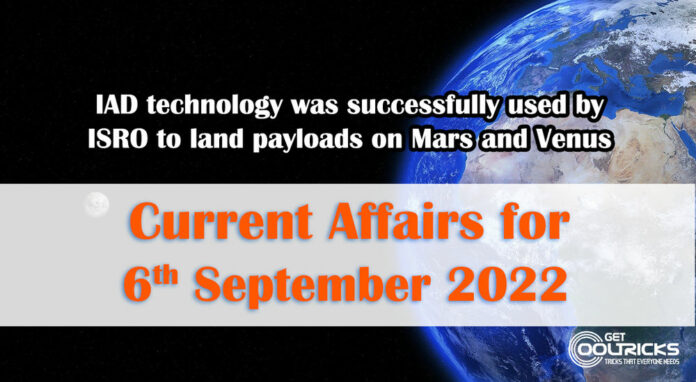 The Inflatable Aerodynamic Decelerator (IAD), which ISRO says is a game-changer with numerous implications for future missions including to Mars and Venus, was successfully tested. Vikram Sarabhai Space Centre (VSSC), an ISRO division, successfully test-flew an IAD from Thumba Equatorial Rocket Launching Station on a “Rohini” sounding rocket (TERLS).

The Unique Identification Authority of India (UIDAI) has topped among all Ministries/Departments for resolving Public Grievances in the ranking. The report was published by the Department of Administrative Reforms and Public Grievances (DARPG). In a statement released by the Ministry of Electronics and IT, it is stated that UIDAI is further committed in serving the people of India and has been a catalyst for both ease of living and business.

Indian Army chief General Manoj Pande was conferred the title of Honorary General of the Nepali Army by Nepal President Bidya Devi Bhandari in Kathmandu. General Pande was honoured at a special ceremony at the President’s official residence ‘Shital Niwas’ in the capital city of Nepal. He also presented a sword and scroll during the function.

The Uttarakhand education department launched an e-governance portal “Samarth”. This portal provides all administrative and educational updates including information about entrance exams, salary structures, and appointments from five state universities and 140 public schools. The initiative has been taken in a bid to make the education system more transparent in the state.

Tripura becomes the first state in India to have the first modified bio-village. The Daspara village of Tripura is converted into a nature-based lifestyle and livelihood and reduced the use of chemical fertilizers. Daspara is a home for 64 families which depends on agriculture and fishery.

Prime Minister Narendra Modi has announced a new initiative, the development and upgradation of 14 thousand 500 schools across the country under the Pradhan Mantri Schools For Rising India (PM-SHRI) Yojana. PM-SHRI schools will become model schools which will encapsulate the full spirit of the National Education Policy.

Grandmaster Aravindh Chithambaram wins the 22nd Dubai Open Chess Tournament with 7.5 points. While seven Indians finished in the top 10, R. Praggnanandha was in the second spot with five others. R Praggnanandha who recently defeated World No.1, Magnus Carlsen, in the FTX Crypto Cup in Miami, won four games straight and was defeated by GM Rinat Jumabayev from Kazakhstan.

CCI approves the acquisition of BillDesk by PayU Payment

Supreme Court judge Justice DY Chandrachud has been appointed as the next executive chairperson of the National Legal Service Authority(NALSA). The post was previously held by the Chief Justice of India UU Lalit. President Droupadi Murmu has appointed Justice D.Y. Chandrachud as the executive chairman of the NALSA.