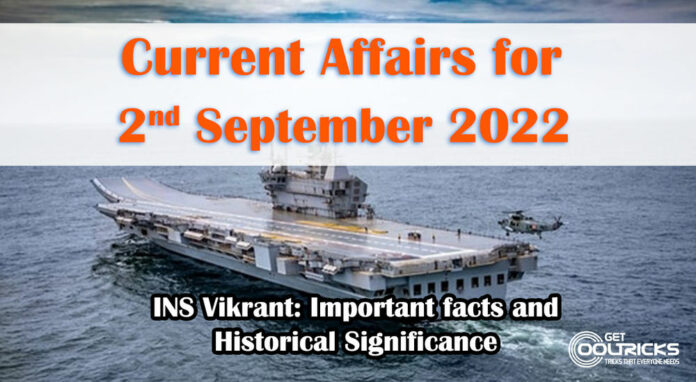 INS Vikrant, India’s first home-built aircraft carrier was officially commissioned by PM Narendra Modi after nearly a year of sea trials. The 45,000-ton warship was constructed for 20,000 crore rupees. The largest warship ever constructed in India, the INS Vikrant is 262 metres long and 62 metres broad. India now only possesses one aircraft carrier, the INS Vikramaditya, which is based on a Russian basis. India currently only has one aircraft carrier, the Russian-platformed INS Vikramaditya. Three carriers in total have been sought after by the defence forces, one as a spare and one for each of the two main naval fronts in the Indian Ocean and Bay of Bengal.

Alappuzha has become the fifth fully digital banking district in the state. A declaration was made by the Reserve bank of India Kerala and Lakshadweep Regional Director Thomas Mathew regarding this. As a part of the initiative at least one digital transaction facility, such as a debit card. Internet banking, mobile banking, a unified payment interface, and many other facilities, has been enabled 26 lakh savings or current bank accounts in 29 banks in the districts.

Indian Computer Emergency Response Team (CERT-In) under the Ministry of Electronics and IT, in collaboration with the Cyber Security Agency of Singapore, successfully designed and conducted the Cyber Security Exercise “Synergy” for 13 Countries. The Group is being led by India under the leadership of the National Security Council Secretariat.

The Ramon Magsaysay Awards Foundation (RMAF), which is widely regarded as the “Nobel Peace Prize of Asia,” recently announced this year’s awardees in a global announcement ceremony.

The 2022 Ramon Magsaysay Awardees are:

i. Sotheara Chhim-He is a mental health advocate from Cambodia. He is a leading voice in Cambodian trauma syndrome. He is being recognized for “his calm courage in surmounting deep trauma to become his people’s healer”. As a child, he was forced to work in Khmer Rouge camps for more than three years until their rule ended in 1979.

ii. Tadashi Hattori-He is a sight-saving humanitarian from Japan. He is being recognized for his simple humanity and extraordinary generosity as a person and a professional. He decided to become a doctor at age 15 when he witnessed the rude treatment that his cancer-stricken father received in a hospital.

iii. Bernadette J. Madrid-She is a children’s rights crusader from the Philippines. She is being recognized for “her unassuming and steadfast commitment to noble and demanding advocacy. Since 1997, she has led the country’s first child protection centre at the Philippine General Hospital in Manila. It has served more than 27,000 children as of last year.

iv. Gary Bencheghib-He is an anti-plastic pollution warrior from Indonesia. He is being recognized for Emergent Leadership for “his inspiring fight against marine plastic pollution.

23-year-old Divita Rai from Karnataka won the prestigious title of Miss Diva Universe 2022. She was crowned by the reigning Miss Universe 2021, Harnaaz Sandhu, at a lavish ceremony that celebrated the 10th anniversary of the coveted pageant. At the 71st Miss Universe pageant, Rai will be representing India, where Harnaaz Sandhu was crowned as the winner last year. Pragnya Ayyagari of Telangana was declared Miss Diva Supranational 2022.

Indian credit card issuer SBI Card has announced the launch of the ‘CASHBACK SBI Card’ in India. As the company claims CASHBACK SBI Card is the industry’s first Cashback-focused credit card that enables cardholders to earn 5 per cent cashback on all online spending without any merchant restrictions. Consumers across India, including tier 2 and 3 cities, can easily get CASHBACK SBI Card instantly through the digital application platform ‘SBI Card SPRINT’.